The Enforcement of Context and the State of Interdependence: Dense Milieu and Live Feuilleton

A promo text by Diedrich Diederichsen

It doesn’t happen very often that you come across your social scene almost in its entirety out in the street after an event, deep in discussion, with or without a bottle or a glass in their hand, sitting, standing, leaning – and yet here they are, having come from two, sometimes three different events: a play, a dance performance and an experimental concert. Sometimes the social density, the feeling that everyone is here, can be explained away by the festival held in all three of the HAU Hebbel am Ufer’s spaces that’s linked thematically and artistically in order to attract a public reasonably aware of one another. But more often than not there are wildly different things going on – a resident theatre company visiting from the US in one space, a queer re-enactment project in another and a doom metal concert in the third, which leads to subcultural scenes that used to be much closer meeting for a drink in the fourth space, the WAU – the HAU’s café and restaurant – where people usually end up in front of or inside of after events. 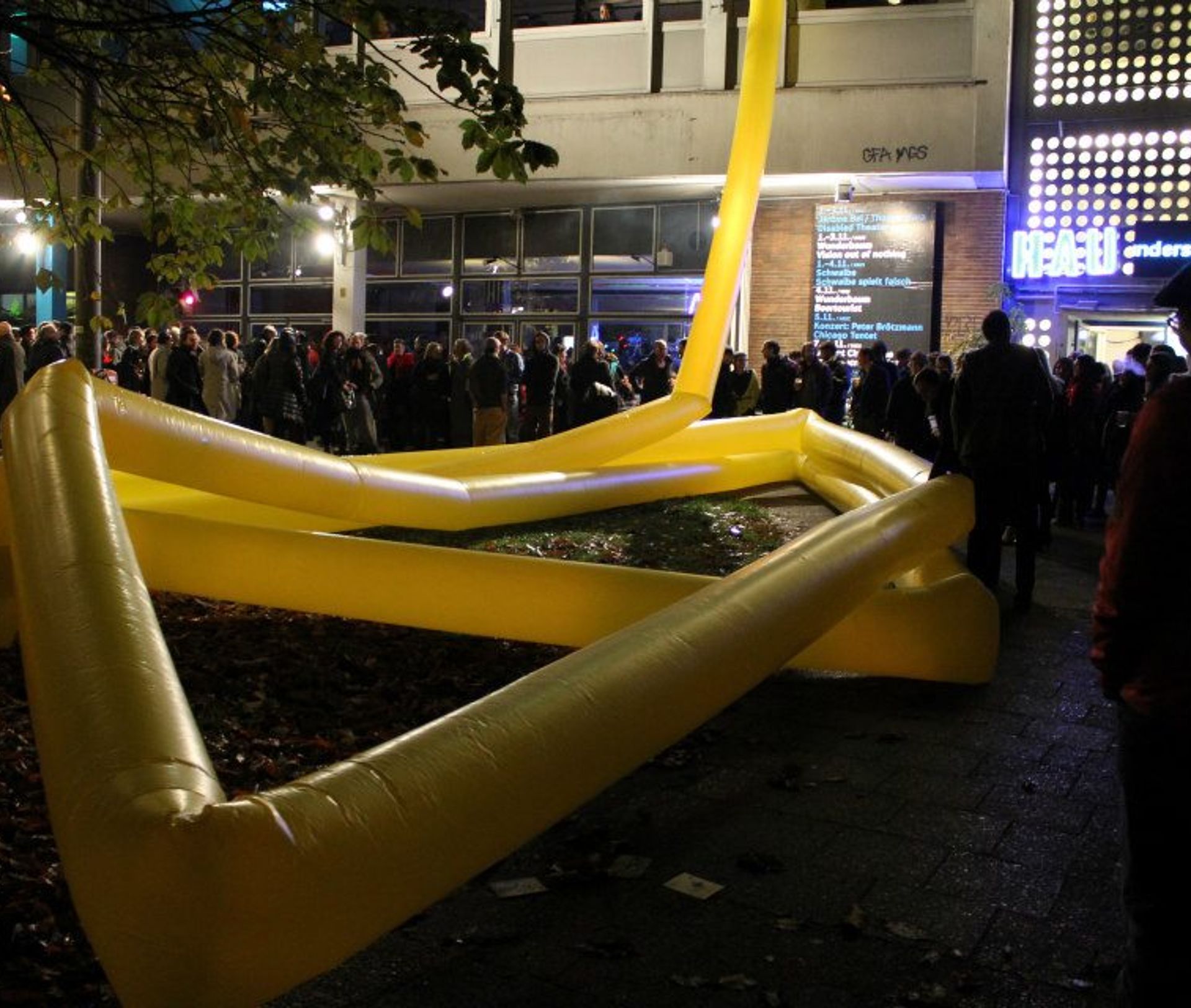 Since the 1990s there’s been a series of new hybrid theatrical genres in Berlin that reflected the fact that the city had to incorporate, or as we would say today, integrate the earlier divided and localised specialised cultural scenes of the old Federal Republic and the former GDR. What was once big in critical theory in Frankfurt am Main, in the pop music underground of Hamburg and the visual arts scene in Cologne had arrived in Berlin; what was being debated about cinema in Munich and up-and-coming in theatrical forms in Bochum or Bremen, whoever’s working in Anklam or Leipzig on a completely different socialist art or elevating media art in East Berlin, they all converged in the then new Berlin without being able or wanting to continue with something that was developed locally. There were many surviving, occupied and revitalised places and apart from the customary and well-known success stories of techno, Russendisko and the Volksbühne or ‘People’s Theatre’, there were a vast number of smaller developments from hip hop labels to dance festivals, which not only generated great popularity for the city – and not solely from international tourists – but above all hybrids: artistic, activist, journalistic, organisational amalgamations, which weren’t immediately recognised as such. In the meantime, people used old buildings and therefore the shadows of their former institutional past.

With the forming of the HAU Hebbel am Ufer it was the first time an institution responded to this complex situation; not only in terms of content, but primarily at an institutional level. As a multi-part chain of three event spaces suitable for very different forms of performing arts in the broadest sense, the HAU articulates that everything happening in these spaces belongs together, without there having to be an obvious reason: it developed a form. What were the things that belonged together? From the very beginning, so called thematic weekends were embedded into the HAU programme alongside theatre productions. These were often far reaching and comprised discussions and artistic or even musical offerings on themes that complemented the central theatre programme.

A “Live Feuilleton”: short and explosive curated lectures and discussion events on themes and people who control the relevant debates of the hour.

At the HAU this has become a genre with a corresponding institution. The territorial/functional principle of the three spaces with a practically adjacent restaurant correspondents in a unique, formal way to what the HAU produces in a much more reasonable way than the often used term ‘interdisciplinarity’. Interdisciplinary is many things: if one were to simply say that they wanted to make a programme comprised from the areas or genres of dance, theatre, performance, music, theoretical discussion, etc., one would create a completely different programme from the one found here. It seems powerful to admit that the programme undoubtedly is determined by the specific interrelatedness of the three spaces.

Firstly, this leads to a state of interdependence between discursive and artistic formats. The HAU has adopted the developed culture of hybrid forms from within the realms of art and theatre from many small and large institutions, in which art no longer wishes to appear as an uncovered or anticipatory demonstration or illustration of theoretical considerations, even if art theory still repeatedly makes use of examples created by its own protagonists. Such a spiral of circular reasoning of legitimatising discourse was always a problem of the 1990s, whereby theory and art production were viewed in relation to one another in new ways. In the HAU there is a juxtaposition that time and time again forces a reappraisal of one’s own message or act – why am I only speaking, or showing pictures, undressing or singing, when I would be crawling, discussing or dancing? The lame excuse of the ‘generic’ lecture-performance that can happily be evoked when these considerations don’t take place, won’t survive much longer through the constant exhibited neighbourhood of contrast that the HAU celebrates.

Secondly, we have to discuss an interdisciplinary practice that has nothing to do with the terminology fetish of the same name; not the neoliberal joy at the proliferation and cross-linking of genres, but rather the artistic and content proximity that lives between the various genres. This ranges from the well-established imports from the USA and Europe (if, for example, I see The Nature Theatre of Oklahoma and a concert comprising acts from a famous and well-advanced post-electronic label like the Viennese-based MEGO shortly afterwards, I experience a completely unexpected feeling); to the opening up of other artistic areas of the world (a highlight of the last few years: the focuses of countries and regions outside of NATO culture); up to the extensive thematisation of very special historical and at the same time completely new practices (I’m thinking of the legendary ‘Live Film’ weekend, which was not only dedicated to the figure of Jack Smith and his various, inspiring past practices but from which derived a concept that contemporary artists could use across all genres): and yet I still wouldn’t end up with the things I would call a Live Feuilleton or what I consider to be the most important aspects of the HAU: short and explosive curated lectures and discussion events on themes and people who control the relevant debates of the hour. In all these cases something comes together that rehearsed institutional and domiciled arts forms and disciplines couldn’t achieve; they are rather part of a long collaborative and communicative practice and therefore don’t require a normative, fetishised concept that operates with ‘inter’: it has long been a cultural reality and has up to now been missing in an institutional form.

Which brings us to our third point: of course, not everything that happens at the HAU is to do with everything and if I were to or could meet my cultural scene every evening I went there I would have left the city a long time ago. Far more often I’m there alone and wondering in the foyer of HAU2, lost in contemplation of the passing U1 train, why such and such a person hasn’t come to an event. Because, thirdly, much of cultural proximity is surprising and unknown and has a further, I believe, more central advantage: it leads to a kind of enforcement of context that you don’t find in many other houses in many different sectors.

If the close relationship between milieus and themes, hot issues and intense concerts is experienced time and time again, the distant, ever-unknown or incomprehensible gains a new emphasis. That which isn’t in my context, my scene, my language will become part of my potential context, it will become a potential challenge. This cannot be achieved from simply being open, tolerant and multidisciplinary. You really can have everything running parallel like in the old neighbourhood cinemas where you’d have pensioners’ afternoons and the kids’ films running happily alongside action thrillers and adult films. The fundamental experience of knowing something is happening next door from where I’m sitting is central for the HAU’s visitors. Its three spaces haven’t achieved this on their own, but rather in partnership with a programme that time and time again contributes to the engagement of one thing with another.