Thoughts on “Rolling” by Michael Laub

When I was a kid living in Belgium, we had two or three TV channels. They were in black and white, and the programmes usually stopped at around 11pm. Later, my parents moved to America for a couple of years, and over there you could watch TV 24/7. In 1981, when I founded Remote Control Productions, I was living in Sweden, which I think was one of the first European countries to get cable TV. I was impressed by William Burroughs and his cut-up technique at the time, and when I realized that you could zap from one channel to another and construct completely different narrations from the sums of all these fragments, I got caught up in that idea. Later on I didn’t want to be a “cut-up technique guy” for the rest of my life, so I tried making more linear pieces as well. I get bored easily, and I’m often critical of myself and of my work. “Fassbinder, Faust and the Animists” is one of the few pieces that I have done that I actually ended up liking a lot, emotionally, aesthetically and even politically. I had a hard time coming to terms with its undoing and was confused about what to do next.

“In my childhood, going to the movies helped me a lot in the conservative Belgium of the time.”

In my childhood, going to the movies helped me a lot in the conservative Belgium of the time. You couldn’t watch too many good movies before you turned 16 or even 18, so I did everything I could to look older in order to get into the cinemas. I tried to persuade older couples to get me in or buy tickets for me, things like that. I remember being constantly afraid of getting caught. At that time one of the few places I could stand being alone in was the cinema. I remember often being disoriented when the lights came back on after the film.

The development of “Rolling”

With “Fassbinder, Faust and the Animists” there was a formal logic from the start and an existing chronology I could play around with: we had a beginning, an end and the scenes from “Beware of a Holy Whore”. As opposed to that piece, in this one I’m more or less forced to have my own logic, if any. That’s what I like about certain early French new wave movies: you can draw your own narrative conclusion, and that often corresponds to our perception in reality anyways. It was kind of ironic that while doing a piece about an ex-theatre group that is now making a film and is falling apart as a group, my own company fell apart. We were supposed to go on tour with “Fassbinder …”, but it didn’t happen for internal reasons.

“Rolling” happened accidentally. I wasn’t really aiming at doing a big new piece after the dismantling of the previous one, because I felt ‘disconnected’ and that was going to be the new piece’s title.

After the mess with “Fassbinder …” undoing I thought: What can I do next? I realized that I still had a bunch of very good performers I had only looked at through the prism of the casting of "Fassbinder …”. So I had another look at them and included new ones. I enjoy this cast a lot. They contributed very much to the piece. Even if the play might suck, which I hope it doesn’t, I don’t think they do.

“I’m always a little afraid of meanings that are too obvious.”

During those first auditions among other thematic attempts I tried to put a scene together consisting of three or four film excerpts back to back, and they did fit together in a weird way. In the evening after the rehearsal I thought: if we managed to put three excerpts together, why not try five? And it went on like that, and I didn’t know what I was doing.  Then it got to the point where the scene was ten minutes long and I was getting more and more uninterested in everything else I was going to include in the new piece. I thought: if I can hold the attention up for twenty minutes with an accumulation of movies, then we should be able to do a whole piece limited to that concept. I threw everything else that was supposed to be in ‘disconnected’ out, and changed the title as I didn’t want to impose a specific reading of the piece.

“Rolling” is the most fragmented piece I have done so far. I find it interesting how the fragments might have become a whole after all. I’m always a little afraid of meanings that are too obvious. When you put two scenes together, there’s suddenly another interpretation. But this is not only an intellectual exercise for me. I’m mainly trying to have fun, whatever that means.

One of the reasons I love film so much is that it incorporates so many other art forms. Take “Boogie Nights”, for instance: the base line in the soundtrack is like a character by itself. I am interested in rhythm, in dance scenes and in certain subject matters. If you take sexuality, which is still a major topic in films, and you look at the evolution of sex in films, it seems like theatre is really behind. I find a lot of theatre very trashy. And I like the borderline between high and low arts. While constructing “Rolling”, there were some practical elements to consider. I wanted to balance the dance parts with the theatre parts, and I didn’t want too well-known scenes in it like “You talkin’ to me”, from “Taxi Driver”, for example. I knew what I didn’t want and that’s always a start. I didn’t want just parody either. In “Rolling”, there’s always an intrusion of reality. I like the fact that someone like Donald Trump appears in one of the scenes, because he is more disturbing than the fictional characters. “You speak pretty good American, for a Comanche“, a quote from “The Searchers“, a movie starring John Wayne, is a line that some people in the USA could still say today to a Native American. That makes this scene weird and frightening at the same time. I also like the idea of jumping in time, because I’m not a very nostalgic person. I watch new movies. I listen to music produced today as well as old stuff. I’m also watching a lot of TV series at the moment, and I’m fascinated by the possibility of developing a character over a few years.

“I’ve always had a weird relationship with theatre.”

In a way this production is quite the opposite of what I have done before: I have always tried to give a film feeling to my stage work. This is probably the first time I’m trying to give an acute stage feeling to film work. I’ve always had a weird relationship with theatre anyways. With “Fassbinder, Faust and the Animists” I had this conceptual approach. Now, with this piece, I really didn’t know what I was doing. It was a free flow by the cast and me that I attempted to organize, and it was bewildering, because I like to cling to the idea that there is a logic. I like to cling to the illusion that I have control. “Rolling“ is like an orchestrated delirium. It’s also totally subjective rather than academic. On a personal level, my memory is often distorted and I started to mix films up too in my recollections.

The subconscious and the reality

I am not much of a spiritual person, but I believe in certain trance and hypnotic techniques. I am very interested in the subconscious. On an emotional level, I think the piece changes depending of the mood you are in. You might be touched by scenes you weren’t touched by the night before or the other way around. When I go to the cinema, I don’t really care if they had any problems during the production, I just want to be entertained, whatever entertainment means. I was very entertained by Ingmar Bergman’s movies, but many people tell me they find them extremely depressing. I also know that I adore certain things on screen that make people feel uncomfortable, while I wouldn’t enjoy anything close to it in reality. For instance, I enjoy certain countries on film a lot more than being there. I also enjoy characters in films that I wouldn’t want to meet in the streets because they would terrify me. A lot of actors would tell you that it’s way more fun playing a bad guy than it is to play a nice one. But I’m afraid people sometimes can’t tell the difference between fiction and reality. There’s often a lack of distinction and complexity when it comes to distinguishing films and their authors.

I wanted to be in HAU1 with “Rolling” because I wanted to make it look as theatrical as possible. I decided to go for two looks, one: the frame around the screen, like in the cinema; the other look will be that of a “real” theatre stage. I wanted the differences between them to be visible and sometimes merge.

Recorded and edited by Annika Reith, © HAU Hebbel am Ufer 2019. 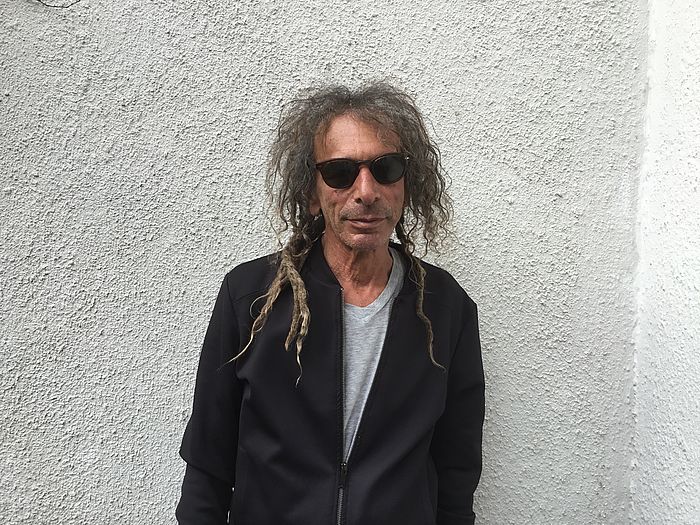