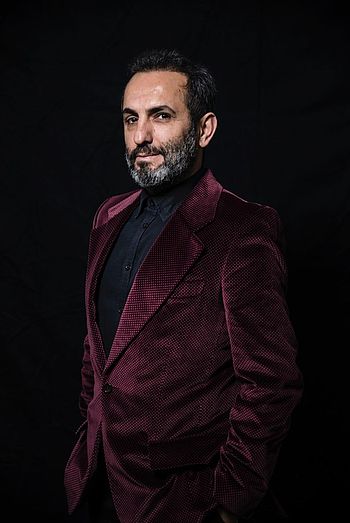 Halil Altındere developed the Space Refugee project for Neuer Berliner Kunstverein, which in the light of European fears of foreign infiltration and at some ironic distance proposes to use the cosmic space as a haven for refugees. One of the exhibition’s key features is a film about the former Syrian cosmonaut Muhammed Ahmed Faris, who in 1987 with the Soviet spacecraft Soyuz TM-3 went on a seven-day journey to the space station Mir. Today the former hero of the USSR and supporter of the democratic opposition movement against Assad lives as a refugee in Istanbul.

The exhibition Space Refugee aesthetically borrows from the art of Socialist Realism and refers to the heroic depictions of Soviet cosmonauts. So there is a kind of hagiography about Muhammed Ahmed Faris in the form of painted portraits, a realistically crafted silicone bust and a documentary video. The vision of a life in space for the refugees is substantiated with specially designed spacesuits from a fictitious “Palmyra”-space mission, a planetary rover and a virtual reality video.

You can find further information on the n.b.k. website.