The Present Is Not Enough. Performing Queer Histories and Futures

2019 marks the 50th anniversary of the Stonewall uprising. In 1969 a group of people from New York’s LGBTIQ community took a stand against constant police raids, thereby triggering a new liberation movement and initiating the fight for legal and social rights in the USA. 2019 also marks the 100th anniversary of the Institute for Sexual Research, which was founded by the German theoretician Magnus Hirschfeld. Starting from these two major historical events, HAU Hebbel am Ufer presents an interdisciplinary festival focusing on the notion of queer temporality. The festival analyzes both political and artistic histories as a basis for the outline of future scenarios as well as the active shaping of a queer present.

Which narratives are still missing when we address queer history/histories? With this festival, HAU offers a contribution to the politics of memory by presenting artistic positions from diverse countries which have been underrepresented in mainstream discourse until now.

The present is not enough – as long as people outside of cis and heteronormative structures are still arrested, persecuted and killed. Queerness can be understood as a vision for the future. The time to come will be determined by its people and their actions, which are already showing today the potential for a queer future.

As part of the festival, HAU initiated an open call for artists based in Berlin, who were invited to submit proposals for the Manifestos for Queer Futures. 270 artists replied to the open call, and 26 were selected and will be presented on the stage of HAU2. The spectrum of projects covers a wide range, from works with cultural and socio-political references, active examinations of the past, to visions of a possible future.

Accompanying the festival "The Present Is Not Enough – Performing Queer Histories and Futures", HAU published a new edition of its publication series. Featuring a preface by curator Ricardo Carmona, texts by Paul B. Preciado, Ewa Majewska, Maxim Eristavi, Jota Mombaça, artist statements and historical photographs from the Berlin of the Weimar Republic.

"Refusal of the Present” by Ricardo Carmona

"Public against our will?” by Ewa Majewska

Programme “The Present Is Not Enough” 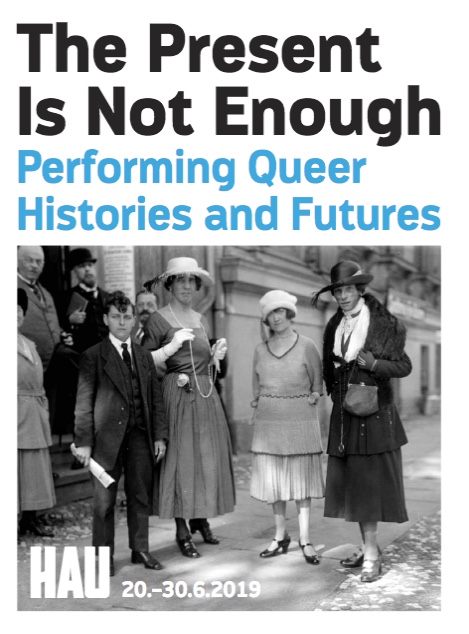