Made Up of Time and Energy

In recent years Nature Theater of Oklahoma’s work has taken many different directions but recently they went back to choreography as their main medium. With “No President. A Story Ballet of Enlightenment in two Immoral Acts” they return to HAU.

In “No President. A Story Ballet of Enlightenment in two Immoral Acts”, the tables are turned. The piece is modelled on the Handlungsballett or ballet d’ action to the music of Tchaikovsky’s “Nutcracker”. Thus, an entire artistic genre serves as a ready-made here. As is central to this genre, the story is of the essence. A ballet d’ action, as theorised in the second half of the 18thcentury by Jean-Georges Noverre, is all about the expression of emotions and character in a story  and in that sense thrives on truthfulness, not on artifice. This is also the case for “No President”, but only in a very specific way.

A ballet d’ action is not an evident concept. It only developed fully in the 19th century as the romantic ballet but still determines the conventional image many people have of ballet. Despite this, few people are able to read the meaning of the poses and gestures of the dancers. There are some 80 of these, each of which conveys a strict meaning. Usually, they are more than enough to convey the rather elementary plots of ballets such as “The Nutcracker” or “Swan Lake”. But still, the majority of the audience has to rely on a summary to follow the plot. That in itself casts doubt on the theory about dance as an expression of emotions and character. But nobody cares because in the end, the audience only wants to see how many pirouettes the black swan can perform.

How could one dancer cannibalise another while elegantly flapping their arms and feet?

This eagerness of the audience to see neck-breaking stunts is somehow paradoxical. As a romantic fantasy, ballet is the perfect demonstration of the theory of the fourth wall: what happens on stage is totally unrelated to the actual reality of the audience. It is as if they were absent or become so absorbed in this alternative reality that they forget themselves for the duration of the performance. But neck-breaking pirouettes are more of a circus act: they are only too real. There is no fourth wall in the circus.

Watching “No President”, it soon becomes obvious that Copper and Liška will wreak considerable havoc on their model. To begin with: the story is not rudimentary at all, but crazily complex. It is about a security firm that is commissioned to guard a mysterious theatre curtain. The security guards are jobless dancers and actors. Two of them, Mikey (Ilan Bachrach) and Georgie (Bence Mezei) are best friends until they discover that they are in love with the same woman (Tale Dolven), who unfortunately is also their supervisor and married to the company’s boss (Gabel Eiben). Their lives don’t get any easier when a rival company, the Ballet Bandits, threatens to take over their jobs and even launches an attack. By accident, Mikey almost kills Georgie during the fight. It seems he will die, but later he magically revives, and even starts an affair with the supervisor. Mad with anger, Mikey cannibalises his boss and in turn becomes President. Through some more unlikely plot twists, he loses the job again but this time he is purified and makes friends again with Georgie. The reconciliation is celebrated by cannibalising the supervisor. It is only then that they dare to open the theatre curtain they were guarding all this time. They discover a mysteriously lit stage, full of smoke. There, they perform the dance they have been rehearsing all the time they were on guard in front of the curtain.

It is as if we were watching two set designs that got mixed up: one an old theatre, the other an old subway or factory.

It would be impossible to tell this story through movement alone, with or without a summary. That is why Robert M. Johanson is always present on the stage to explain the events and comment on them. But that is not his only role because it appears that he, as the omniscient author, is very unreliable. He actually is the devil that set this train of extremely violent events in motion. His relentless comments are one way in which Copper and Liška poke fun at the concept of a ballet d’ action: without his presence this ballet would only be a series of incomprehensible routines, odd props and similar costumes. But he is unreliable… They make it even more ridiculous when it comes to the violent scenes. There is no way to represent them within the conventions of ballet. How could one dancer cannibalise another while elegantly flapping their arms and feet? But still they do, in a half-clumsy way. They destabilise the concept of the ballet most obviously when they introduce elements derived from alien sources such as splatter and horror movies or wildlife documentaries. (In this respect, Nature Theater still is working with found material from everyday life. It is in their blood, obviously). All this “fun” however hardly distracts the audience from the fact that what they see is an overblown image of the violence that governs social relations these days. Indeed there is not one conflict that doesn’t have a heavy death toll. All the time, however, Mikey keeps on desperately hoping for the best. The redemption at the end of the piece, when they finally conquer the hidden stage behind the forbidden curtain, can only be a very bitter one.

There is much to say about this ballet, but I would like to point to two specific and related aspects; one scenographic, the other choreographic. The scenography (Ansgar Prüwer) is the very first thing that might strike the audience, even before the show begins. It is in its own way a textbook case of alienation. In the centre is a weathered stage portal, on which there are still traces of gold leaf. The frame is symmetrically flanked by two oblique short walls that frame equally weathered doors. The upper part of the right wall seems to have disappeared: you can only see the underlying woodwork. It looks so convincingly old you would swear that this is a historical stage portal. Except for the curtain. That looks brand new.

On both sides of this stage frame there are two more parallel, slightly offset walls. No effort has been spared to make them look real too. They are covered to half their height with heavily damaged, old-fashioned tiles. On the battered plaster walls above one can make out faded painted frames. The surface of the walls thus resembles those of old factories or subways. But despite the effort, they look completely fake: not only are they impossibly thin, they obviously only serve to hide the light batteries at either side of the stage. They function in the same way wings do on a conventional stage. But that is absurd, because wings belong behind the stage frame, not in front of it. Behind the stage portalthey could add to the atmosphere of the piece. Standing in front of it, they compete with the stage portal. It is as if we were watching two set designs that got mixed up: one an old theatre, the other an old subway or factory. It is a cadavre exquis.

A hotchpotch of ballet, calisthenics (exercise) and slapstick.

There are two parallel ways to explain this odd stage design. From the spectator’s point of view, it means that we are actually behind the scene or, to put it differently, we are behind the fourth wall. We are part of the illusion and in that sense, we are also responsible for its message and effects. We are no longer allowed to ignore the atrocities we see in front of our eyes, whether we like it or not. From the performer’s point of view, it means that the “reality” they live in, the way they understand the events, is really an illusion.

The piece confirms both points of view emphatically as Mikey doesn’t stop wondering whether the fourth wall is still present. But what is most striking is his overall attitude during the play. He swears by the texts of Stanislavski, the theorist who demanded that the actor should really feel the emotions he is representing (an anti-Diderot therefore). Through the teachings of the Actors Studio, this still remains the predominant model for the bulk of American movies. Because of their impact, these define the way in which people understand themselves to a large degree. The result is one we all know: endless psychobabble leading, after as endless difficulties, to redemption or any other happy ending that forgets all about the victims along the way. But if the play succeeds in something, it is at least this: it shows most clearly how this sentimental psychobabble about personal redemption more often than not serves as an excuse for inexcusable conduct. That is exactly the structure of this play: an endless series of fake-real sentiments, inspired by a fake-real idea of authenticity, that cause enormous human damage but are still absolved by the happy reconciliation between Mikey and Georgie. In no way can this leave the spectator unharmed. He or she has to take a position on this, whether he or she likes it or not.

This is all confirmed by the strangely hybrid nature of the choreography. In essence, most actions are performed in an abstract way, as abstract as the ballet code initially was. Which is funny, because the light movements of the dancers (some of whom are indeed young dancers, though others are actors or have no proper professional training either as an actor or a dancer) are more often than not in stark contrast to what Johanson tells us they mean. The fights with the Ballet Bandits, for instance, are choreographed as if no blows were dealt. Except for one detail: the corps de ballet does make an effort to mimic its consternation in the direst moments of the play. That is also true for the main protagonists. Usually they fully engage in the abstract ballet, but in the crudest scenes they start “acting” – albeit in a very crude way too. Their mime is closer to 19th century gestural and facial emphasis than to contemporary acting. On closer inspection, however, this proves that even the balletic moments are not really homogenous. They are a hotchpotch of ballet, calisthenics (exercise) and slapstick. The hybrid nature of the dance is telling in its own way.  It reveals an arbitrariness in the way we make use of what is at hand to gratify ourselves, if only by seducing our audience.

This in an excerpt from the text “Made Up of Time and Energy” by Pieter T’Jonck, first published in the book “The Life and Work of Nature Theater of Oklahoma”, edited by Florian Malzacher. 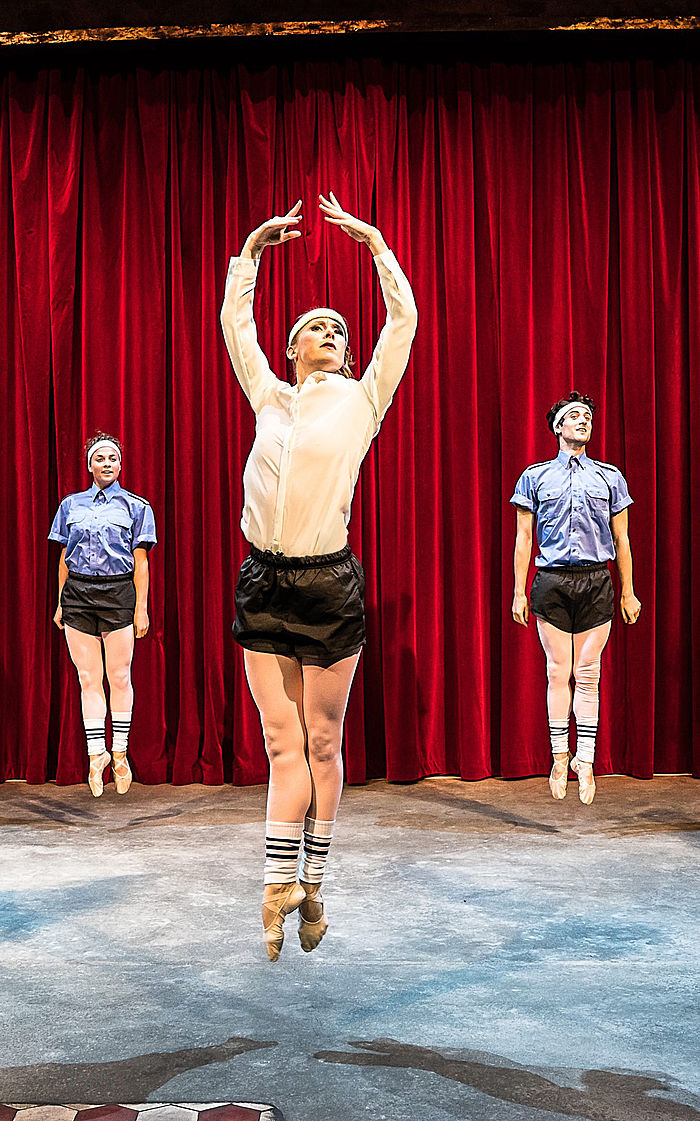 Artist talk and book launch: The Life and Work of Nature Theater of Oklahoma

No President. A Story Ballet of Enlightenment in Two Immoral Acts