With Haszcara, Laila A. & Alice Dee 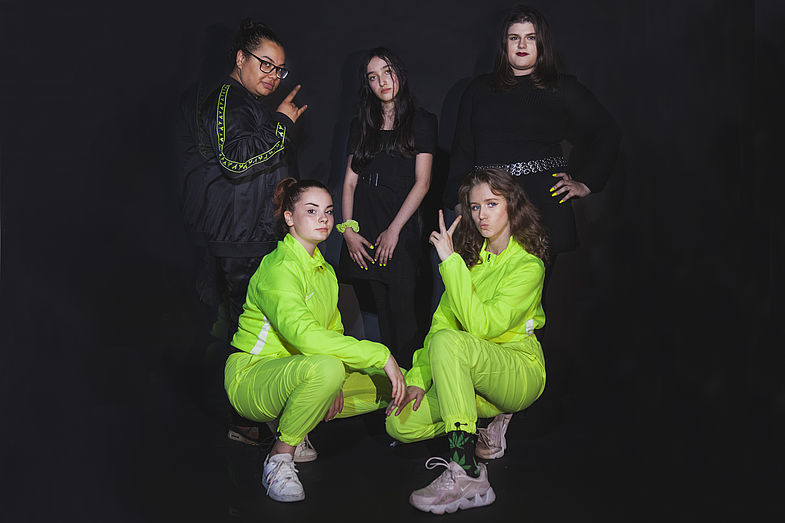 “Sisterhood, das sind wir!” (“Sisterhood, that's us!”) is a line in one of the new songs by the girls from Wedding known as Sisterqueens, who've been writing their own lyrics for years already, using rap to express their concerns. Their new songs will be presented for the first time on the stage of HAU1. They touch on solidarity, the hood, friendship, women's and girls' rights and rap itself, still a male-dominated field in the music business. ongoing project founded Sisterqueens in 2018 as a platform for rap by girls in Berlin, having based it on close cooperation with MÄDEA/Stiftung SPI, an intercultural center for girls and young women. Their aims are strengthening the self-confidence of girls and other genders, highlighting injustices and using rap as a form of artistic expression than can bring their positions and voices to the stage.

“For Kollabo – das Konzert”, members of MÄDEA have entered into a close musical and content-related collaboration with three Berlin rappers. Haszcara, Alice D. and Laila A. have been major players in the entire production and have their own parts in the new songs.

ongoing project's productions with Sisterqueens have already received numerous awards; the young rappers have already performed in the House of Representatives, at HAU's Kiezparty, at the opening of the Heizhaus at Uferstudios and on the streets of Berlin.

Supported by: Musicboard Berlin and within the framework of the Alliance of International Production Houses by the Federal Government Commissioner for Culture and the Media. The songs have been created as part of the project “Kollabo” in cooperation with MÄDEA/Stiftung SPI, supported by the Berliner Projektfonds Kulturelle Bildung and the Jugend-und Familienstiftung of Berlin.