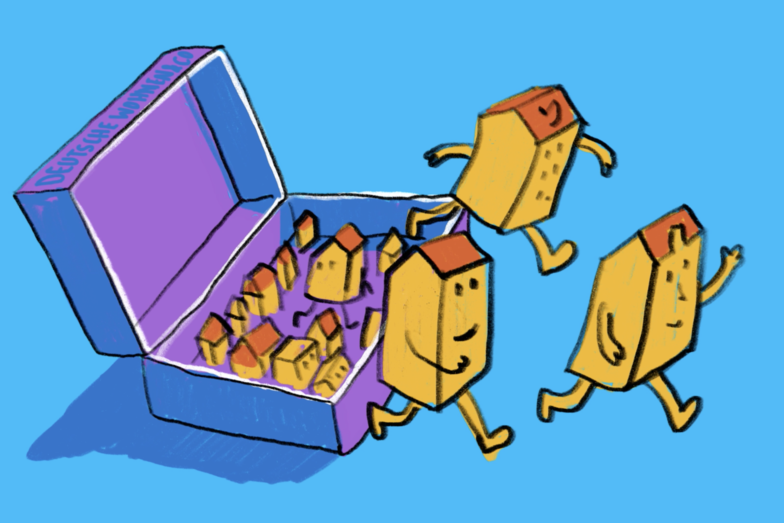 The animated film by the artist Yorgos Konstantinou documents our “Werkstatt zur Enteignung und Vergesellschaftung des Wohnens”. At the event in October 2019, nine city and tenant initiatives came together at HAU Hebbel am Ufer to talk about their neighbourhood commitment and think collectively about various socialisation models for housing. The occasion was the referendum campaign “Deutsche Wohnen & Co enteignen” (Expropriate Deutsche Wohnen & co.), which collected 77,000 signatures last year and is still waiting for the Berlin Senate’s legal assessment for the referendum to move to the next phase. They discussed what should be done with the flats when they belong to us, looked at past-experiences of re-municipalising housing stocks and explored ideal models of co-operative property management.

The event, which was part of the festival “Berlin bleibt! City, Art, Future”, was a resounding success. Our thanks go to the initiatives involved and the audience. The future of housing is a question that is, of course, still highly topical. Its explosive implications can be seen in the current pandemic, where homes have become the spaces people have been mandatorily confined to and the property sector is already calling for compensation.

As a follow-up to our “Workshop on the Expropriation and Socialisation of Housing”, another workshop was set to take place in April under the title “#KeinHausweniger: Werkstatt für die Selbstverwaltung von Berliner Haus- und Kulturprojekten”. Ultimately, spiralling rents don’t just affect residential buildings. Above all, the very existence of numerous alternative house and cultural projects is under threat. Key initiatives from the campaign #KeinHausweniger and other movements had planned on discussing the importance spaces of solidarity and self-organisation have with regards to affordable living and working space, inexpensive culture, protection against discrimination and neighbourhood structures. On HAU3000, we will publish the current demands of the guests, again visualised by Yorgos Konstantinou.

With: Bucht für Alle, which has developed an alternative planning draft for the Rummelsburger Bucht; the (youth) centres Potse and Drugstore, which have been self-organising for more than 40 years; Liebig34, an anarcha-queer-feminist house project which – as is the case with Potse – is currently facing eviction; Lause bleibt!, a living and work space for cultural and political projects, whose tenants are fighting together for its survival; Moviemento, one of the the oldest cinemas in Germany, whose team are attempting to buy the premises to save it.