The German premiere of “Moving in Concert” by Mette Ingvartsen would have taken place on March 27 during the festival “Spy on Me #2 – Artistic Manoeuvres for the Digital Present”. But due to the coronavirus suspending of the physical programme, the dance piece about a universe where humans, technologies and natural material coexist couldn’t take place at HAU2. Even thought it’s not a replacement of the live performance, you can read here an interview with the choreographer, not only about her latest production.

Could you tell us about the themes you are exploring with “Moving in Concert”?

In “Moving in Concert” we are working on the body’s abstract relation to technology. Or rather, how to understand technology as something that is still active within our bodies even when we are no longer in direct contact with technological extensions. I am particularly interested in how technology influences and transforms the neurological patterns in our brain. How it changes the way we sense, think, live and feel.

In your previous performance series on sexuality, “The Red Pieces”, you already touched on the influence of technology on our bodies, for example by the pharmaceutical industry. Which other aspects from that series are you addressing in this performance?

The idea of non-human agency and the body’s relation to objecthood are themes I was already exploring within “The Red Pieces”, but also even earlier when I was making “The Artificial Nature Series”. “Moving in Concert” started as an attempt to bring together those two strands of research: on the one hand the work I have done on sexuality and the human body, and on the other the choreographies I have made for non-humans. It led me to search for relations between the performativity of humans, technologies and natural materials, and to explore varied forms of co-existence between these elements. What we focus on in this piece is the performativity of humans, technologies and natural materials, and how they coexist on stage.

The technological condition we are living in today is no longer only about mechanically extending the capacity of the body.

You speak about technology and the brain; how do you think these two inter-relate within today’s society?

Technology has always enabled us to think and to do things we were not able to do before, but today it also creates new illnesses that we didn’t have to face in the past. If you think about it from a scientific and contemporary perspective, this is manifested in how the body is literally being modified by scientists in areas like microbiology, genetic engineering, neuroscience, or from a more dystopic perspective within the pharmaceutical industry.

The technological condition we are living in today is no longer only about mechanically extending the capacity of the body. It is also about transforming it from the inside out, a process our neuroplasticity is deeply involved in. It suffices to watch our computers, telephones and tablets for more than eight hours a day to understand how the images, texts and intimate communications on social networks transform our mental structures, our moods and our bodily sensations. 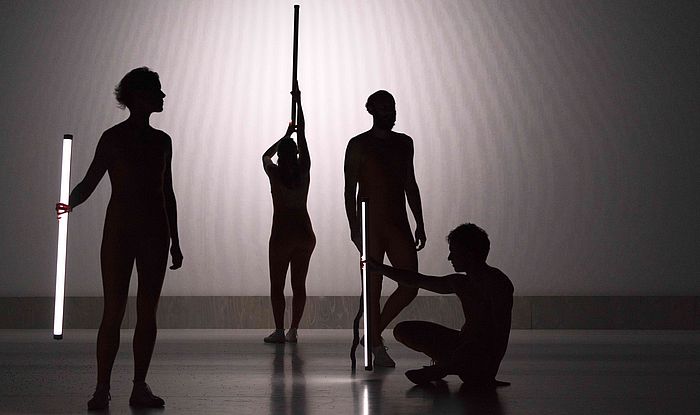 You do not use those very recognizable technological tools in the piece. Instead you use wireless LED lights, with which the performers create all kinds of abstract and social formations. Why did you make this decision to abstract away from concrete uses of technological tools?

First of all because the biggest part of “technology” is not visible nor materialized in specific objects. Secondly, because I am more interested in the processes that are activated in our bodies than in the technological objects themselves. In the piece, we work a lot on the perception of light, shadow and color. One of the focuses is on circular movement. Turning and spinning with the lights are used as tasks that create a specific neurological activity both within the body of the performer and the spectator. At first this turning practice might seem isolating, as it is impossible to fully see each other while doing it, but in fact it simply relies on a different form of sociality than the ones we know from everyday life. What we aim for is to create an abstract form of togetherness where rhythm, speed, color, and sharing an intense physical activity produces a different form of collective behavior. To me this almost metaphorical way of handling technological tools and to physically represent technological patterns, is more interesting than showing what most of us knows all too well – how to use a smartphone or a computer creatively.

For me, dance and choreography have never been isolated fields of expression that can be completely dissociated from social and political questions.

What does working with abstraction offer, according to you?

In my solo “21 pornographies”, I needed to address certain issues like the abuse of power, violence or sexualized torture. For these topics I did not feel that abstraction was the right strategy; I needed to address them head on. During the research for that performance, however, I discovered other physical materials that I found very exciting although they did not make it into the piece. I was for instance working a lot with a mobile LED light creating all different kinds of movement patterns that later become the starting point for “Moving in Concert”. Abstraction in this frame offers the possibility to address questions I have about our society, regarding our sensory capacities and how they are being modified by technological developments. Some of these questions I felt could be addressed in a more relevant way through abstraction than through more narrative forms. For me, dance and choreography have never been isolated fields of expression that can be completely dissociated from social and political questions. But in this work abstraction felt like the most accurate way to approach and materialize the ideas I had. At the same time, abstraction also invites the audience to engage with movement and choreography as such, because it does not offer semantic content, as has been the case in my previous works. Nevertheless, before the performance starts on stage, the dancers also share short texts with the audience about some of the technological processes we have worked on. This is a non-abstract way to open a first door towards mental images and perception for the spectators.

Another key topic in “Moving in Concert” is ‘plasticity’. What is your understanding of this term? And how does it resonate in the piece?

The idea of plasticity actually comes from neuroscience, in which scientists speak about the plasticity of the brain, or the brain’s capacity to transform and build new neurological patterns while at the same time also having a capacity to resist external influence. Catherine Malabou in her book “What Should We Do with Our Brain?” (2004) has taken this neurological research as a cue to address current problems within our knowledge and information-driven economies, like for instance the problem of precariousness or the demand for flexibility that many people face today. This book was very inspiring, but at the same time I did not know exactly what to do with its content in regard to making a performance. Instead of trying to translate it, I started to think about what plasticity in an artistic practice could mean or what it would look like in a performative form. “Moving in Concert” is the result of that thought experiment.

Why is the piece called “Moving in Concert”?

The performance is called “Moving in Concert” because it is inherently a piece about being and moving together. What currently interests me is to think about collectivity across different forms of existence. If we think about the collectivity of humans only, then the social, or the idea of co-existence appears in a specific way. If we try to think about collectivity across that line and include humans, technologies, and natural materials, we need a new imaginary. When I first started thinking about the piece I actually called it “Moving in Concert (with things)” to indicate that what we need today is to reconsider how we cross-breed with non-human elements and how this transforms our human ways of relating, not only to each other but also to the non-human elements that inhabit this earth with us. What I am searching for is a different balance between humans, technologies and natural materials, towards more nuanced and experimental forms of co-existence, or perhaps even an unexpected resistant form of being together.

An earlier version of this interview was published by Kaaitheater. 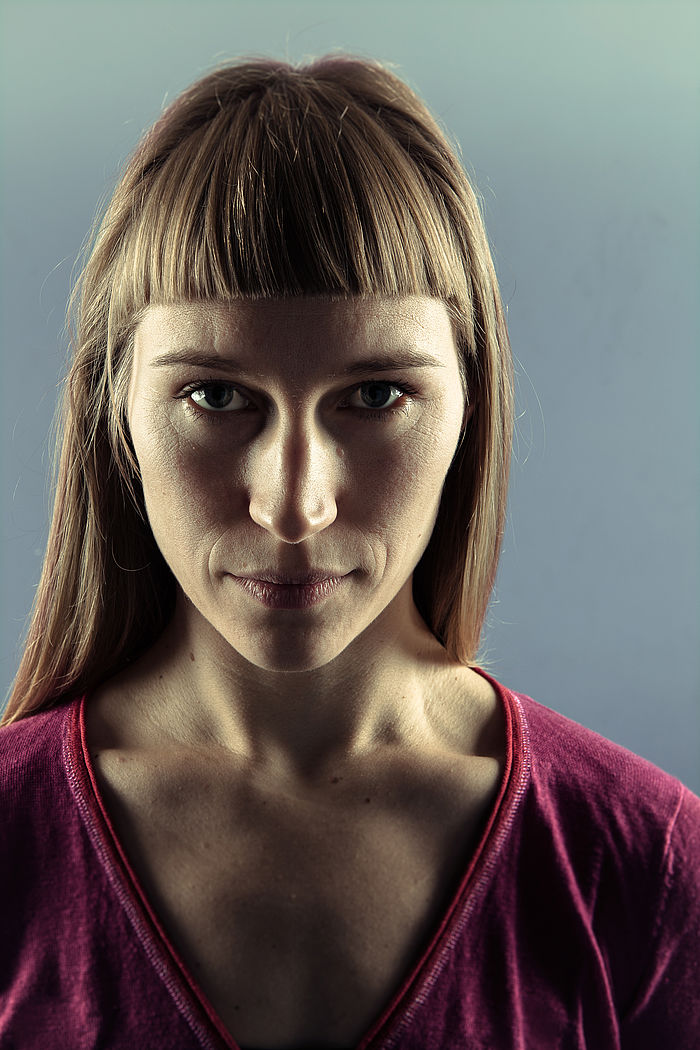