In a continuation of the “MONUMENT” series, the choreographer Eszter Salamon connects traces of Sicilian musical archives, mummification rituals of the Capuchin Catacombs in Palermo and historical references to the Sicilian revolution of 1848. “HETEROCHRONY / Palermo 1599–1920” – a HAU co-production – imagines a continuum between life and death, the cohabitation of the living and the dead. The scheduled performances on April 8 and 9 at HAU had to be cancelled due to the corona virus. Read an interview by Bojana Cvejić, first published by PACT Zollverein – where the play premiered.

I began thinking about the question of how death is included in life when I visited the Capuchin Catacombs in Palermo. From 1599, the monks of the Capuchin order have observed a peculiar custom: instead of burying their dead, they mummified them in this place, which is still open for visit. Later on, the custom spread to include wealthy citizens who paid to have the body of their loved ones preserved. In 1920, the last body joined a collection of about 1250 mummies. Since the modern times, death has been evacuated from our societies; the dead disappear from our view, their bodies are removed from the perception of the living. The encounter with the mummies of the Catacombs brought about a kinaesthetic shock for me. Getting so close to the appearance of the dead body I recalled the massive deaths of our times, genocide, carnage, but also sick bodies and illnesses like AIDS and cancer our society tends to hide and marginalize.

What does it mean to make a “monument” for you? This one is the sixth in a series.

The concept of “monument” is a bit of a bluff or a provocation. It is an exaggerated manner of naming power in the processes of memory and the writing of history. Who is the subject of history, who remembers and what is to be remembered. “Monument” means for me taking time to reflect on the past.

With each ‘Monument’, I try to juxtapose and superimpose different temporalities on stage. 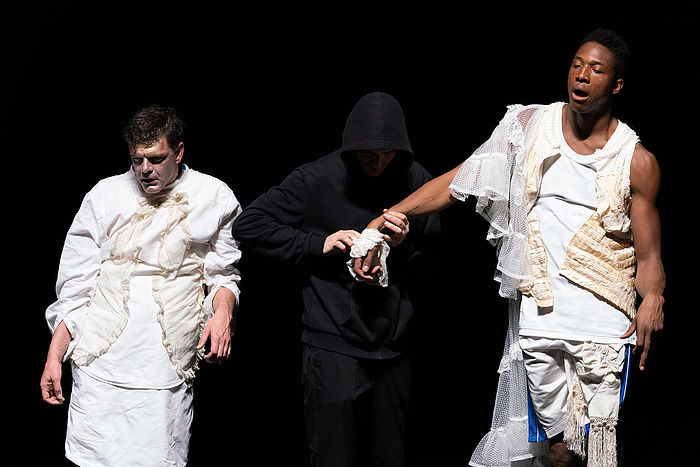 With your Monument series, are you seeking to redeem some parts of the past, those lost promises of the past that will flash up before our eyes in a moment of danger, to paraphrase Walter Benjamin?

I am interested in the histories that we tend to forget. Instead of a faithful revival and re-enactment, I search for transformation in which these histories could be linked with our present. For example, with “Monument 0.4: The Valeska Gert Monument” I sought out to construct the rest of Gert’s large oeuvre that remains unknown. The question that guided me was: what would that work be now if we could remember it at all, what would it look like and mean if it was staged today? In that sense, “heterochrony” is an apt term to describe what I try to do with each monument, juxtapose and superimpose different temporalities on stage to break out of the exclusivity of the present. I mount historically distinct times of past and present and sometimes also in a literal, physical sense, different ways that time passes for us on stage.

I was looking for embodying a mummy, but for relations that the dancers could draw from the mummy in their own bodies.

This is the fourth performance around death you made. Tales of the Bodiless (2011) in which I collaborated with you, begins with a description of a “bog body.”

Yes. How bodies are preserved in bogs, those special kinds of acid waters, is opposite of mummification. While the bones of the “bog body” are decalcified and organs and tissues are preserved for a very long time, mummies are skeletons with skin whose viscera are removed or emptied out. Mummies expose anatomy, bones that we feel but do not see. I wasn’t looking for embodying a mummy, but for relations that the dancers could draw from the mummy in their own bodies: figures, postures, petrified gestures, grimaces and rictus, that is the grin of the dead. We developed three techniques in shaping movement and presence. First, we applied a somatic approach to bones, skin, face and mouth in particular; this means that choreography is derived from sensations from within the internal space of the body, the experience that the dancers are ‘fictioning.’ Apart from somatic, that is physical fictions, the dancers use their imagination to produce personal fictions to accompany their movement. Their images are all different, and remain private, like tools that sustain attention and slow change. For example, they can include feigning the experience of temperature, or invoking more synesthetic images of color, rhythm, space etc. And the third and most important technique which I have developed in this piece for the first time, with the help of Ignacio Jarquin who is a singer and singing teacher, is centered on singing with the whole body. What if the entire body would act as the support, and sometimes also the source of sound, and not reduce singing to the vocal apparatus alone. Can the voice turn the body inside-out like in the Moebius strip?

The mummy also brings the principle of distortion and deformation. You seem to pursue here, like in The Valeska Gert Monument, an interest for the grotesque.

This pursuit of the grotesque started out even earlier, in “Dance #1”, the duo I made with Christine De Smedt in 2008. In “Dance #1”, De Smedt and I ventured into a multiplicity of movement idioms and situations. Within this spectrum of exploration, we found grotesque expression associated with the female body, as well as absurd humor. Later on, as the grotesque returns in my work, it begins to feature as a kind of resistance to the neutral universal body of modern dance, and its smooth operation. Corpses are grotesque, they emanate pain, perhaps even torment in the moment of dying, and the rictus takes us to absurdity. 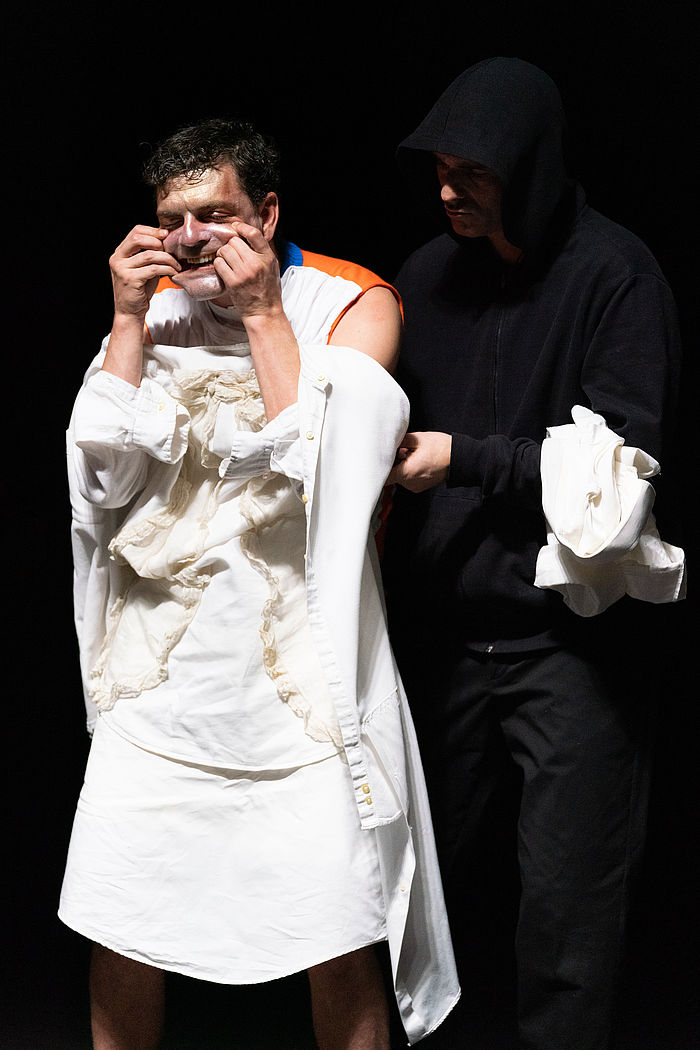 This interview was first published on the PACT website. www.pact-zollverein.de/en/programme/monument-06-heterochrony-palermo-1599-1920​​​​​​​

The utopian body is one that gives itself the time not to be in the present only, but in the past and future of its fictions.” 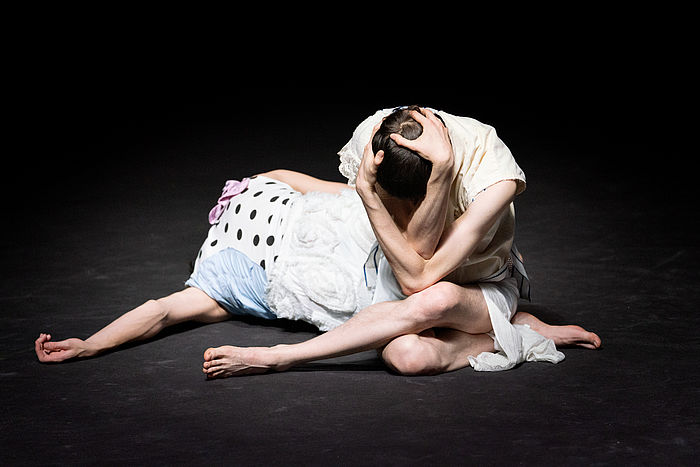 Speaking of resistance, in Heterochrony we hear a text that resembles a call to arms, addressing Sicilians in 1848, who were the first to start the revolt in Italy, “risorgimento” (“resurgence”). A great variety of songs in Italian can be discerned in the musical landscape of this piece. What do the Capuchin mummies have in relation with the revolting bodies on the barricades?Is it not a paradox: a revolting corpse? I am thinking here of the zombies in the Night of the Dead…

Sicily was at the crossroads of multiple occupations and invasions. Various conquerors and oppressors brought their cultural influences. Various cultures, Byzantine and the Moors left their imprint on the music I sought to explore through a journey from sacred pieces and folklore to opera; from the 12th century till the mid 19th century when Sicily was integrated in the unified state of Italy. In fact, the revolts that led to the unification of Italy started in Sicily, which was then the Kingdom of two Sicilies under the reign of the Bourbons. In the musical landscape, the call to arms for Sicilians from 1848 is included.

In one of your references to this piece, Michel Foucault’s lecture “The Utopian Body” (1966), the following reflection seems striking: “What is a mummy after all? The great utopian body that persists across time.”

Revolt entails an explosion, which is energetically different from how we move in “Heterochrony”. Actually, we accumulate the rage within the body, a vivid life inside the viscera and in the imagination of the dancers. The utopian body I have been looking for here is one that can sing in immobility from the entire body, move in such slowness that it gives itself the time not to be in the present only, but in the past and future of its fictions. A dancer who has to reinvent their skills and means of expression beyond a professional specialization.