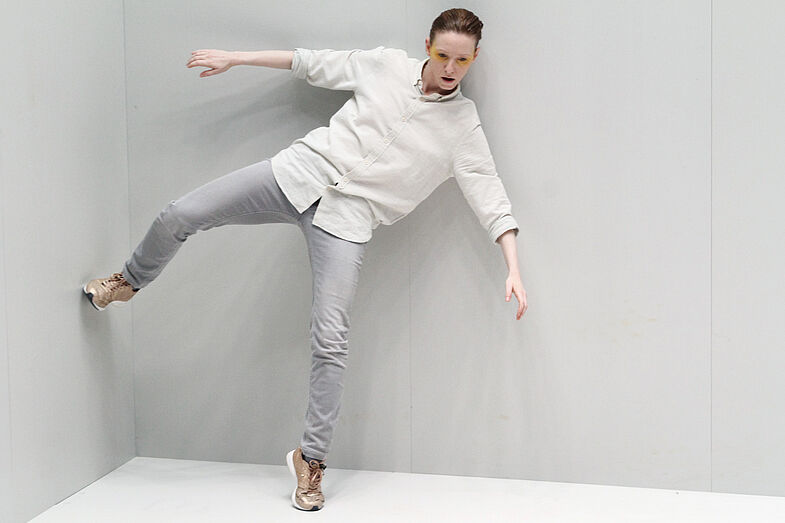 Kat Válastur (born in Athens, Greece) is a Berlin based choreographer and performer. Her dance works are defined by a distinctive dance and visual language, in which fiction and reality merge. In 2009 she created “lang” a duet about time and the way it can be reflected through dance. In 2010 she continued with the investigation on time in a series of works inspired by Homer’s Odyssey. The project, “Oh! Deep Sea” manifested in a corpus of four works: “Corpus I” and “Corpus IV” (2010), “Corpus II” (2011), and “Corpus III” (2012, co-produced and presented by HAU Hebbel am Ufer). In 2013/2014 she was an invited artist at the Institut für Raumexperimente a project initiated by Olafur Eliasson and the University of the Arts, Berlin. In the context of the programme, she started working on a new series “The marginal sculptures of Newtopia” exploring the encounter between the body and a virtual topology it inhabits. The trilogy includes the works “GLAND”, “Ah! Oh! A contemporary Ritual”, “OILinity” a choreographic essay on crude oil dependence by Western societies and the end of resources. All three works were co-produced and presented by HAU Hebbel am Ufer. As part of her creative process Válastur utilizes personal diagrams, scores drawings and texts that she creates for each dance piece. In 2016 she was acclaimed as a promising talent for dance by the magazine “tanz” and in 2017 she was a nominee for the George-Tabori award. After her retrospective “We were better in the future” at HAU (March / April 2017), she began working on a new cycle of works entitled “The Staggered Dances of Beauty”, reinterpreting the production of mythology as a re-evaluated tool to deal with contemporary questions. The first creation of the cycle, “Rasp Your Soul” premiered in November 2017 and the second “Stellar Fauna” premiered in November 2018 at HAU. The third and last part of the cycle “Arcana Swarm” premiered in November 2019 at HAU. Her works are presented nationally and internationally at theatres and festivals. She studied dance at the Hellenic School of Dance, at the Trisha Brown Studios in New York on a Fulbright scholarship, and received a Master Degree from the (SODA) Master Programme at the Inter-University for Dance in Berlin. Kat Válastur is managed and produced by HAU Hebbel am Ufer (Berlin). Her current production, the solo “Eye, Lash!”, in which she herself is on stage, had an online premiere at HAU4 in March 2021 due to the pandemic. The stage premiere will take place in May 2022 at HAU2.