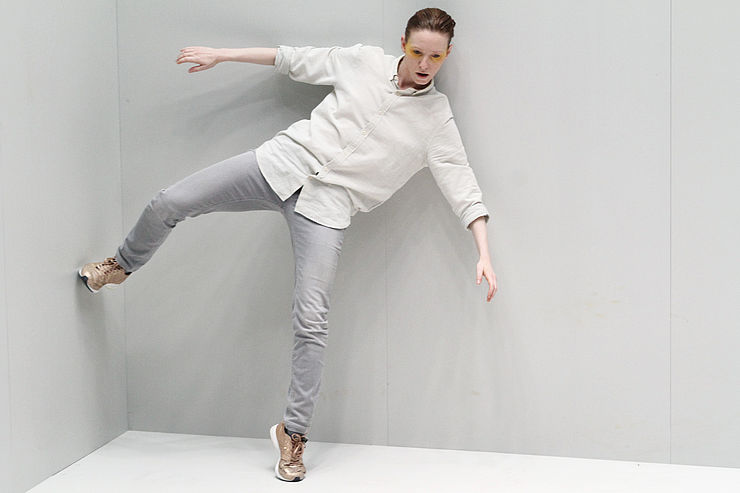 Kat Válastur is claimed as one of the most exciting choreographers in the Berlin dance scene. Her works are defined by the creation of a distinctive dance language. In 2008 she posed the question “What is left to be danced?” and she created “Lang” a duet about time and the way it can be reflected through dance. It was presented at the Aerowaves and travelled to many important festivals in Europe. In 2010 she continued with the investigation on time in a series of works inspired by the Homer’s Odyssey. The idea of the journey in the epos was translated into a notion of time “Odyssey is a journey that passes through space but breaks through time.” The project, “Oh! Deep Sea” manifested in a corpus of four works: “Corpus I and Corpus IV” (2010), “Corpus II” (2011), and “Corpus III” (your whole life passes before your eyes) co-produced and presented by HAU Hebbel am Ufer (Berlin), 2012. In 2013/2014 she was an invited artist at the Institut für Raumexperimente a project initiated by Olafur Eliasson and the University of the Arts, Berlin.  In the context of the program, she started working on a new series “The marginal sculptures of Newtopia” exploring the encounter between the body and a virtual topology it inhabits. The creations of the trilogy includes the works “GLAND”, in which the choreographer and dancer Kat Válastur wanders through unknown landscapes created alongside her body. “Ah! Oh! A contemporary Ritual”, a work that stands as a reflection on the origins and traditions of circle taking place in the annihilation of times, has been praised for its captivating atmosphere and radical inventiveness and “OILinity” a choreographic essay on crude oil dependence by Western societies and the end of resources. All three works were co-produced and presented by HAU Hebbel am Ufer (Berlin). Through her groundbreaking creations, highly intense atmospheres are created, fiction and reality merge into speculative notions, challenging the senses and the rules of ordinary perception. As part of her creative process she utilizes personal diagrams, scores drawings and texts that she creates for each dance piece. In 2016 she was acclaimed as a promising talent for dance by the Tanz magazine and in 2017 she was a nominee for the George-Tabori award. After her retrospective "WE WERE BETTER INTO THE FUTURE" at HAU Hebbel am Ufer (March / April 2017), she began working on a new cycle of works entitled "The Staggered Dances of Beauty", reinterpreting the production of mythology as a re-evaluated tool to deal with contemporary questions. The first creation of the cycle, “Rasp Your Soul” premiered in November 2017 and the second creation “Stellar Fauna” premiered in November 2018 at HAU Hebbel am Ufer. In this series the kinetic technique of morphing is developed in correlation with the use of the voice as an integral part of the bodies performativity. The third and last part of this cycle “Arcana Swarm” will premiere in November 2019 at HAU Hebbel am Ufer. In July 2019 she was one of nine artists selected for the LIVE WORKS Vol. 7 residency at Central Fies art work space. Her works are presented nationally and internationally at theatres and festivals. She studied dance at the Hellenic School of Dance, at the Trisha Brown Studios in New York on a Fulbright scholarship, and received a Master Degree from the (SODA) Master Program at the Inter-University for Dance in Berlin. Kat Válastur is managed and produced by HAU Hebbel am Ufer (Berlin).