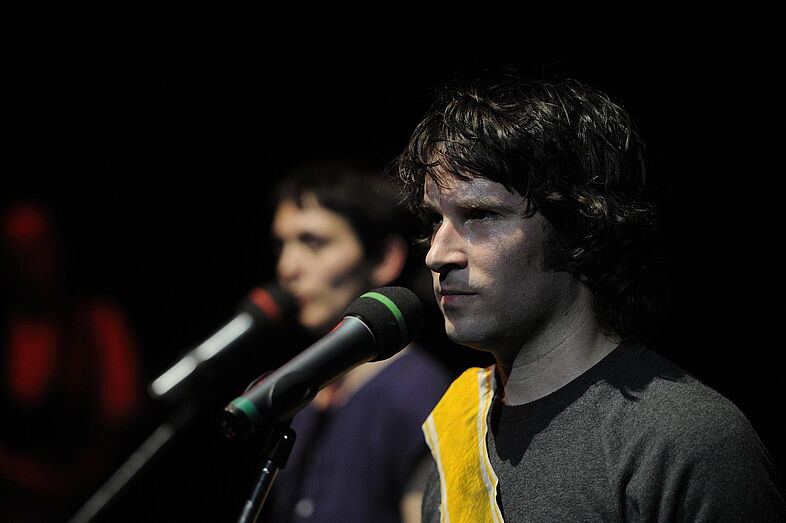 Martin Clausen, actor, performer, director, and since 2008 lecturer at the HBK Braunschweig in the Institute for Performing Arts and Education. In 2000 he founded the collective TWO FISH with Angela Schubot, collaborating until 2011 with dancers and actors on productions for the Berlin Sophiensaele, HAU Hebbel am Ufer, Tanzfabrik Berlin, the Berlin Festival Tanztage, Podewil/Tanzwerkstatt Berlin, and PATHOS Munich. Alongside these venues, he has also appeared at Vierte Welt, the Uferstudios, and the Haus der Kulturen der Welt, as well as in private homes and rooms, in busses, or in secluded staircases. Martin Clausen directs and performs for or with children and young people (Theater an der Parkaue, Jump&Run-Festival at HAU Hebbel am Ufer). In collaboration with the Emergency Drug Services L43 he developed a theater evening at the Festival Munich Central at the Munich Kammerspiele. Alongside his work with TWO FISH, he has also worked with urban lies, post theater, Gob Squad, Nico & the Navigators, bösediva, Bairishe Geisha, Lubricat, Station House Opera, Gaststube°, Unos United, and Streugut, as well as with the directors and choreographers Lajos Talamonti, Volker März, Ingrid Hammer, Sommer Ulrickson, Suse Truckenbrodt, Hanna Hegenscheidt, Andreas Liebmann, Kostanze Schmitt, David Heiligers, and Jasna Layes-Vinovrški.  In 2013 he is working with the group SEE! at the Cologne Schauspielhaus in their staging of “Das Sausen der Welt” (Text/Musik: Peter Licht) and produced “Don’t hope” in coproduction with the HAU Hebbel am Ufer.