Part of "Be Part of Something Bigger" 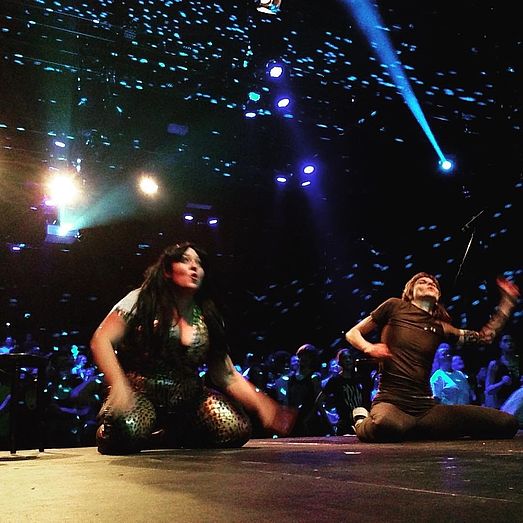 Copy & Dance is a dance floor and a screen on which dance scenes from videos and films from the last 34 years are projected and copied ad hoc by everyone present. Those who want Gangnamstyle will be disappointed, those longing for the Backstreet Boys can hope, those wanting The Time of my Life can have it - without Patrick Swayze but with themselves and the others. Led by MC Tina and VJ Anna there will be dancing – and namely together – copying dance scene classics, music video highlights, the best of today and unknowns from all over the world or right round the corner. Jane Fonda will definitely be there. We dance, because it makes us happy. "Let's dance like we used to..."


Tina Pfurr was born in 1980 in Kassel. As well as working as an actor, performer and voice artist for Paul Plamper, Ze Celso and Gob Squad amongst others, she also develops her own diverse performances such as Mein Weg Trifft 15 Minuten Ruhm for the Rollende-Road-Schau, Volksbühne am Rosa-Luxemburg-Platz in 2005 as well as the 2 person musical unbekannt together! a collaboration with Conrad Rodenberg since 2005. Since 2001 she has regularly worked with René Pollesch at the Volksbühne am Rosa-Luxemburg-Platz. Since 2002 she has worked for film and television. Tina Pfurr is part of the performance collective torstrasse-intim and taheter unkst. She is the director of the Ballhaus Ost in Berlin since 2011.

Premiered as part of "Be Part of Something Bigger. Celebrating the art of collectives and 20 years of Gob Squad", curated by Gob Squad and Christina Runge, supported by Capital Culture Fund and Berliner Kulturverwaltung.