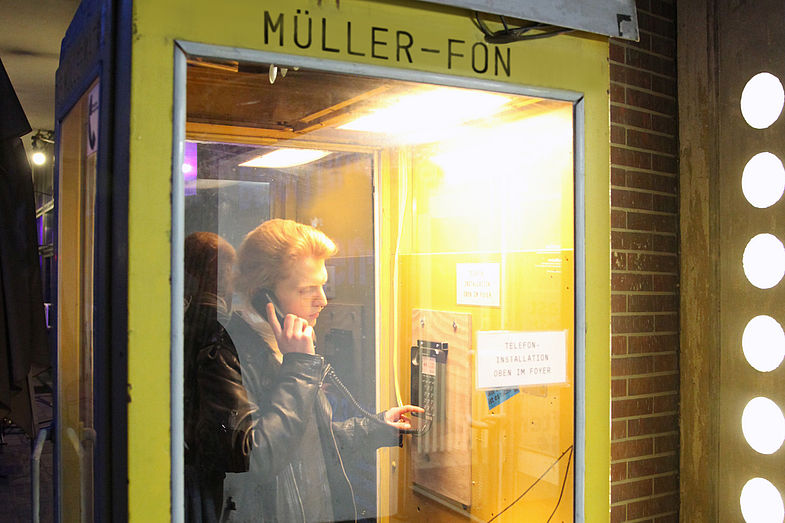 “On the other hand, there is nothing that proves that human beings are the dominant form of life on the planet. Maybe the viruses are and we are just material, a kind of bar for the viruses. The human being as bar - that as well is only a question of perspective.”
Heiner Müller (1989)

In “Müller Phone,” Heiner Müller is resurrected and can be reached by the audience by phone for one month around the clock. Half human being, half telephone computer, the author speaks on a wide variety of present topics: from social inequality to the crisis of Europe to the current theatrical landscape. Callers can individually shape their exchange with Heiner Müller at the push of a button. Müller’s political foresight and his uninterrupted timeliness form the basis of the conversation.

With the analysis, assembly of original quotes and digitalization of the comprehensive Müller audio material, Interrobang has created an artificial Heiner Müller intelligence that looks back on the texts and interviews of Heiner Müller in a spooky and disconcerting manner, newly configuring them for the present and future.

The "Müller Phone" is a development of the installation "Die Müllermatrix", a commissioned work by HAU Hebbel am Ufer, performed in 2016 as part of the festival “HEINER MÜLLER! Was jetzt passiert, ist die totale Besetzung mit Gegenwart”. Courtesy of henschel Schauspiel Theaterverlag Berlin.