Recovery: The Ways in Which We Change in Struggle 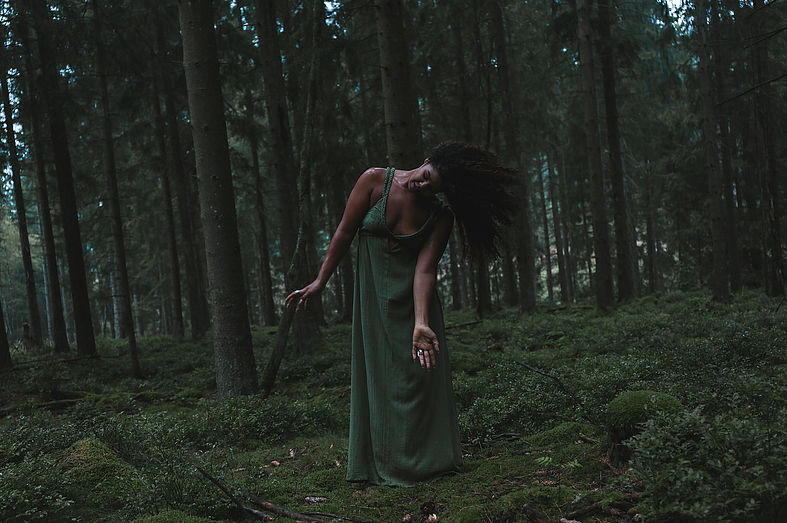 The closing event of the “Radical Mutation: On the Ruins of Rising Suns” program presents a performance of ZOE feat. Mandhla, two pioneers of the German Ballroom culture and Voguing scene, followed by a performance of actress and comedian Thelma Buabeng feat. musician Celina Bostic, as well as closing remarks by Nyabinghi LAB (Tmnit Zere, Nathalie Anguezomo Mba Bikoro, Saskia Köbschall) and Wearebornfree! Empowerment Radio (Moro Yapha Bino Byansi Bjakuleka, Muhammed Lamin Jadama). The title of the evening – “The Ways in Which We Change in Struggle” – as well as the program itself – “Radical Mutation” – references Frantz Fanon’s notion of radical mutation as a change of consciousness that occurs when participating in the anticolonial struggle: the psyche changes profoundly, and new meanings become possible.

ZOE feat. Mandhla’s performative reference to ballroom culture forges a bridge between the Weimar Republic period – Berlin’s golden ballroom age – and the Black, Latina/o and transgender community in New York in the 60s, which in turn inspired the founding of the House of Melody in Germany in 2012. Historically, ballrooms have been spaces where the anti-racist, the working class and the LGBTQI* struggles align. Through radical empowerment, body positivity, visibility and self-love, they contend with their spatial exclusion from, and marginalization within, public and private space.

Actress Thelma Buabeng uses Youtube as a platform to create a space for radical visibility: Her online Youtube-Comedy-Series titled “Tell Me Nothing from the Horse”, captures the complexity of Black lives and realities in Germany, that are all too often reduced to singularities in German media. Through the voices of five personas who couldn’t be more different from each other – Gladys, Annemie, Vivian, Mary-Jo and Naomi – she offers a powerful social satire. This evening, Buabeng let’s some of her characters reflect on the Black Lives Matter moment, the hypocrisy of German Unity and the unbearable whiteness of German theatres. She is joined by singer songwriter Celina Bostic, a driving force of the German Soul- und Contemporary R&B scene, who published the anti-racist hymn “Nie Wieder Leise” in August 2020.