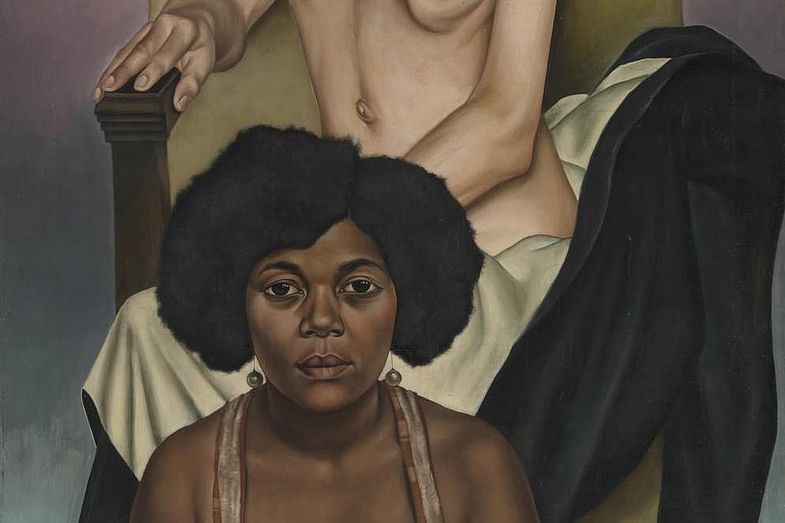 The evening centers narratives of Black, Afro-diasporic and African practitioners working and living in Germany and discusses strategies and spheres of action for resistance and liberation within arts and culture, questioning the manifold power dynamics at play. The relationship between Black, Afro-diasporic and African performers and the German entertainment industry, has historically been shaped by racist and sexist power structures. Yet, efforts to undermine these structures and create spaces of self-determination and solidarity are as old as the entertainment industry itself. This evening centers Rasha, an actress who was born in Madagascar. She performed with her German husband at the funfair on Leopoldplatz (Wedding) in the 1920s, operated by Adolf Rautmann, better known as Onkel Pelle. She was known for performing with her snake, a Boa constrictor, that resided in her caravan’s ceiling, and was portrayed by the German artist Christian Schad in his double-portrait from 1929 titled “Agosta, the Pigeon-Chested Man, and Rasha, the Black Dove”. Shad’s portraits often depicted people framed as outsiders and freaks living and working at the margins of the Weimar Republic society. The absence of Rasha’s last name, unrecorded and never captured by Schad during the painting sessions, mirrors a system that served the white gaze and denied African and Afro-diasporic performers their dignity.

The histories of women* performers in particular, are often relegated to the margins of the archives, further perpetuating their silencing through sexist and racist power structures. Rita Dove’s poem “Agosta, the Pigeon-Chested Man, and Rasha, the Black Dove” (1983) deconstructs the dynamic between Schad and Rasha, by letting Rasha gaze at Schad, mercilessly. Taking inspiration from this shift, this evening invites Black theatre practitioners to reflect on their experiences in Germany and the historically charged relationship between the institution of the theatre and Black practitioners in Germany. How could a radical reversal of gaze manifest in theatre making? How can theater practices in Germany radically center Black and PoC perspectives, histories and audiences?

Rita Dove: Excerpt from “Agosta, the Pigeon-Chested Man, and Rasha, the Black Dove” (1983),

of Rasha, so far from Madagascar,

turning slowly in place as

When the tent lights dimmed,

Rasha went back to her trailer and plucked

a chicken for dinner

foot on the stair.

She moved slowly, as if she carried

the snake around her body

she brought fresh eggs into

the studio, flecked and

and Rasha at his feet.