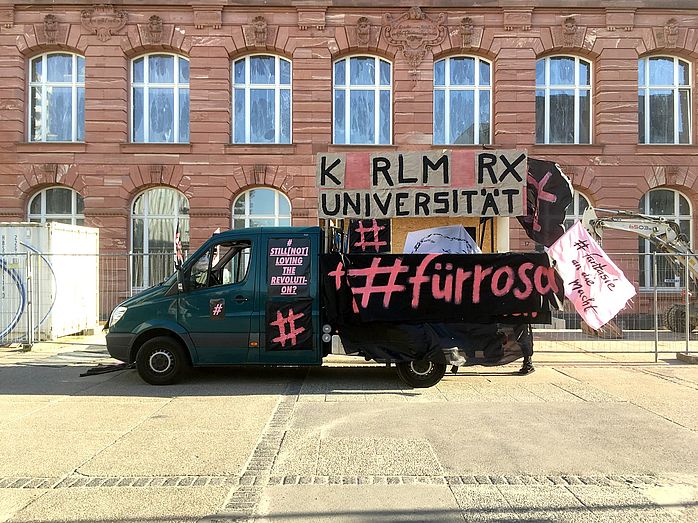 '68 is turning 50, the children of the “children of Karl Marx & Coca Cola” already have children of their own. They will learn about 1968 the same way that earlier generations learned about 1848, as Hannah Arendt suspected: “Failure as chance!” Yet it is precisely failed revolutions that leave traces and establish an ‘invisible republic’. andcompany&Co. started their search for an IMAGINARY MOVEMENT in Frankfurt am Main, which will bring them to Berlin in June and from there further eastward to Prague, Sofia and St. Petersburg. They are not demanding: “All power to the imagination!”, they’re just acting on the call. They turn up at the sites of the revolts: A Marx flag flutters in the wind on May 5th (Marx’s 200th birthday) when the Johann Wolfgang Goethe University is renamed Karl Marx University. They take a trip to the German-French border in search of the site of Dany Cohn-Bendit’s secret border crossing. With his former comrades they will call out in chorus: “We don’t give a shit about your borders!” Europe without borders – an ‘invisible republic’? Or the soviet republic that Karl Liebknecht called for 50 years earlier at the Berlin Palace? Two months later he and Rosa Luxemburg were murdered by the Freikorps.

On June 8th andcompany&Co. will present the IMAGINARY MOVEMENT in the form of a lecture-performance, providing a glimpse of their coming play INVISIBLE REPUBLIC (revolution revue), which will premiere in October 2018 in HAU2. How did it go in 1848 again? “A spectre is haunting Europe…”