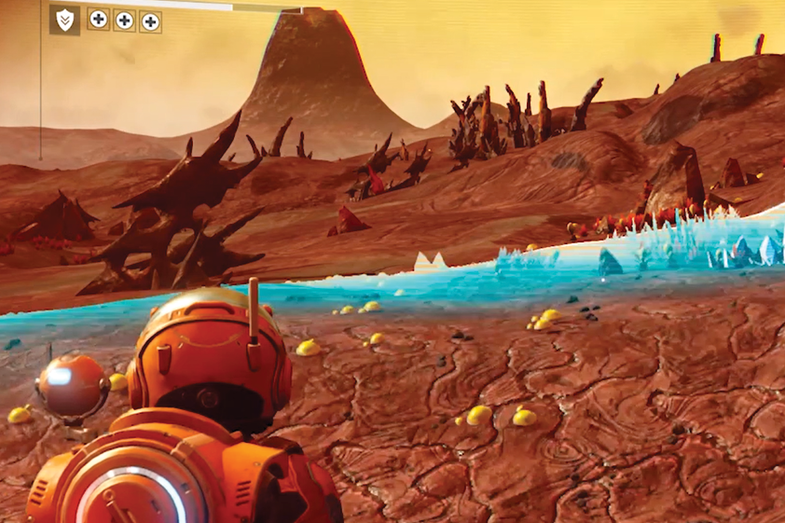 The Mycological Twist would like to invite you on a quest at HAU3 and organises joint gaming sessions of “No Man’s Sky”. In this game a player can explore a seemingly infinite amount of planets, each with their own unique ecologies. Even after countless hours of play, new things can always be discovered.

“Quadrat Sampling E-Ecologies” will consist of two different sessions: In an “introducing workshop” the game and its environment are explored. This will be done through a series of field research tools that have been converted for a digital landscape. In the “gaming session” Eloïse Bonneviot and Anne de Boer invite experts to join them to provoke a different view on the game, and enable a critical reflection onto the narratives and visuals they encounter together with the players.

On the background to the production:

As personal computers are becoming more and more capable of running visually advanced video games, a myriad of worlds is opening up to audiences around the globe. This domain no longer belongs to the stereotypical, mostly male-youth gamer, but rather becomes a social space for rather diverse groups to meet and explore together. These spaces are becoming the next Social Media. While traditional social media connects us through a performativity of the everyday, navigating games engages us with intense sensations through the temporary emotional embodiment of the avatar. As a player you are both the creator and spectator of the narrative, and even better, you can actively enjoy these narratives with others.

Even though these multiplayer games are played by a large number of players, the progression of the gameplay follows similar patterns throughout; kill this, conquer that, become the best, capture it all. A linear quest that dictates the way these spaces operate as well as the audience it attracts. The tropes they endlessly reproduce mirror contemporary constructions of prejudice, power struggle and underlying ideologies. Each game has different problems that demand different explorations and questions to be asked.

The two artists Eloïse Bonneviot and Anne de Boer have already been part of the HAU festivals “Spy on Me #2 + #3” and were most recently represented at the 7th Athens Biennial.

“Quadrat Sampling E-Ecologies” also takes place in cooperation with the Fritz-Karsen-Schule from Berlin-Neukölln. HAU invites a class to play and discuss together at HAU3.

Danielle Brathwaite-Shirley works predominantly in animation, sound, performance and video games to communicate the experiences of being a Black trans person. Brathwaite-Shirley’s practice focuses on recording the lives of Black trans people, intertwining lived experience with fiction to imaginatively retell trans stories. Spurred on by a desire to record the “History of trans people both living and past” their work can often be seen as a trans archive.Thework has been shown at Albright-Knox Art Gallery, David Kordansky Gallery, Quad Gallery, Arebyte Gallery, Science Gallery, Barbican Centre and Tate Modern. During the 3hd 2020 festival by Creamcake, Danielle shared their film and interactive performance “We Are Here Because of Those That Are Not” on HAU4.

Xenia Chiaramonte is a jurist and a socio-legal scholar. In 2019, she published her monograph “Governare il conflitto: La criminalizzazione del movimento No TAV” [“Governing conflict: The Criminalization of the No TAV Movement”], which analyses the criminalization of one of the most longstanding and high-profile environmental movements in Western Europe. In her research, she developed a deep ethnographical approach blended with a theory-oriented vision.

Ahmed Isam Aldin Ahmed is a visual artist, designer and blogger from Khartoum. He studied physics at the University of Khartoum and graphic design and photography in Cairo, Visual communication at Weißensee Kunsthochschule Berlin. His practice focuses on immigration and psychology, as well as the processes of revolutions, de-colonial design, and technology. He has participated in various exhibitions between Khartoum, Cairo, and Berlin, and is currently studying Media Art at UDK Berlin.

Barbara Marcel is a Brazilian artist and film-maker. Her works explore historical views of nature and how these relate to colonial imagery.

The gaming session on 18.12. is live streamed with English subtitles on HAU4.

Production: The Mycological Twist and HAU Hebbel am Ufer. Supported within the framework of the Alliance of International Production Houses by the Federal Government Commissioner for Culture and the Media.

HAU3 unfortunately is not barrier-free. Access to the theatre is via a stairwell (3rd floor). The use of a lift is possible with prior arrangement. If you need help, please contact our Ticketing & Service team at +49 (0)30 259004-27 or email us at tickets@hebbel-am-ufer.de. Wheelchair users are also kindly requested to register their attendance at least one day before the performance.
Thank you for your understanding.