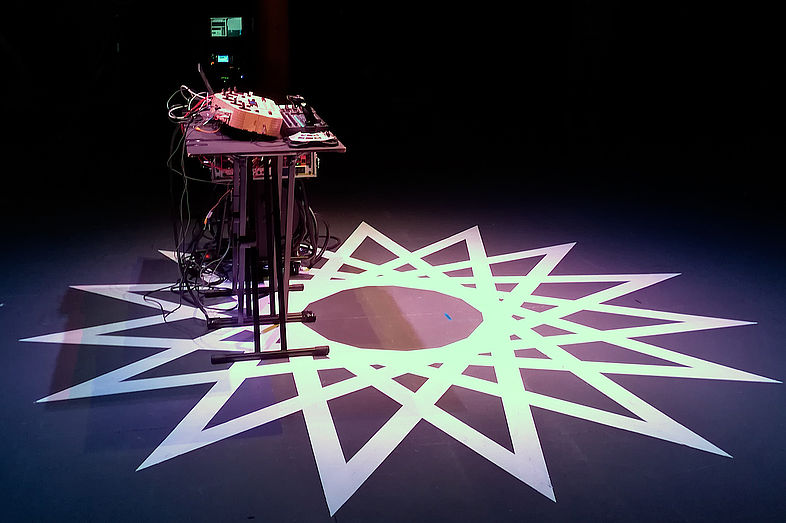 In the spatial sound system “The Pentacle 15.3,” developed by Fedde ten Berge, HAU Hebbel am Ufer and the Berlin-based musicians Driftmachine, Golden Diskó Ship, Jan Jelinek, and Jasmine Guffond invite you into an immersive concert situation. In a circular arrangement made up of the audience and the artists, the interplay of sound and space will be newly explored, turning it into a holistic experience.

Jan Jelinek’s works deal with the transformation of sounds, translating source materials from popular music into abstract, reduced textures. Bypassing traditional musical instruments, he constructs collages using sound fragments from a wide variety of recording devices: tape recorders, digital samplers, media players and the like. He began releasing his work in 1998, initially under the pseudonyms Farben and Gramm. In 2000, his sound collages played in the Young Media Pavilion at the EXPO2000 fair in Hanover. Over the following years, he worked with artists like Sarah Morris, the writer Thomas Meinecke or the improvisation ensemble Computer Soup, and created audio-visual performances with video artist Karl Kliem at venues including the Centre Pompidou in Paris. In 2007, with Andrew Pekler and Hanno Leichtmann, he founded the improvisation trio Groupshow that refuses any repertoire and any limitation on performance duration. In 2008, Jelinek established the faitiche label as a platform for his own experiments, for joint projects, and for work by musician friends. Since 2012, Jelinek has been writing and producing experimental radio pieces for state broadcaster SWR that deal with fictional identities and soundscapes. Under the pseudonym Gesellschaft zur Emanzipation des Samples, as Ursula Bogner, or using his own name, Jelinek’s oeuvre ranges from field recording collage to electroacoustic music to minimalistic drone.

Jasmine Guffond is an artist and composer working at the interface of social, political and technical infrastructures. Her practice spans live performance, recording, sound installation and custom-made browser plug-in. Through the sonification of data she addresses the potential for sound to engage with contemporary political questions. Recent projects employed digital technologies, sonification and the aesthetisation of data. Guffond has exhibited internationally, released solo records with the Sonic Pieces (2015, 2017) and Karlrecords (2018) labels, received the ‘Working Grant for New Music and Sound Art’ from the Berlin Senate (2016) and is a current PhD candidate at the University of New South Wales Art and Design conducting research into sound as a method of investigation into online surveillance cultures. A new album is due to be released on Editions Mego in Spring 2020.

Synth duo Driftmachine started as a workshop where Andreas Gerth and Florian Zimmer, producers of an extensive back-catalog of records and projects, focused on synth exploration and search for a new approach for groove and bass-driven music. The project steadily evolved and the duo ended up releasing several albums on the acclaimed Mexico-based experimental imprint Umor Rex, labels like Hallow Ground & Ongehoord. The duo also produced sound montages for several exhibitions of fine arts, e.g. for Riga International Biennial RIBOCA and for the artist Moritz Götze. They perform live regularly, working with 2 modular systems functioning in sync. Driftmachine’s sound is obsessive, symmetrical and multilayered; a deep and elegant language based on the shaky, unpredictable foundations of modular synthesis.

Golden Diskó Ship is the solo project of Theresa Stroetges, a multi-instrumentalist and video artist. She combines pop and experiment, sound collages and catchy melodies, electronic and acoustic instruments as well as video projections.“Her imaginative soundscapes, shifting from delicate melodic lines steeped in nostalgia to the feedback arcs and textured distortion of machine abuse, evoke lucid dreams and have won critical praise for their fresh, eclectic collages of electronic and acoustic sound." (CTM Concerts)

With friendly support by the Kingdom of the Netherlands.