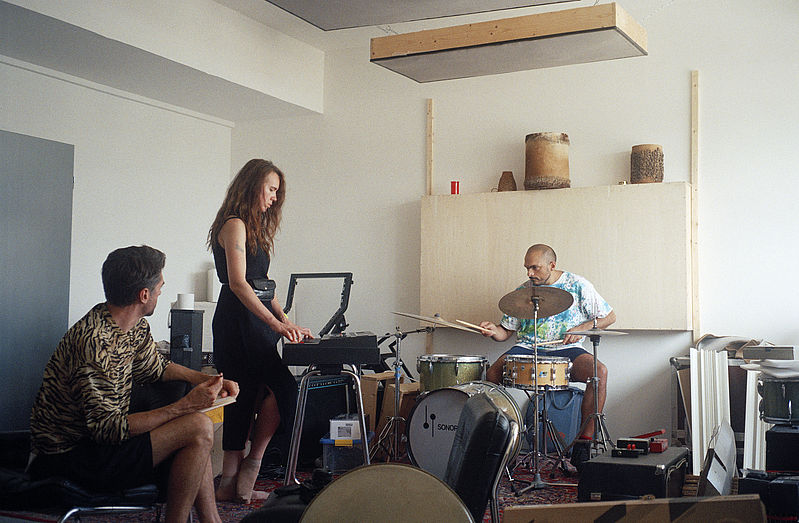 Three artists – Galina Ozeran, Etkin Cekin and Sebastian Lee Philipp – meet for the first time on the same stage in order to wake up the ancestral animals sleeping in the subconscious. Through a joint impromptu game, they call them to join the sacred sound ritual. What kind of beasts-spirits will come to the watering hole - even the musicians do not know. Inspired by Pauline Oliveros’ approach of creating inclusive listening experiences by collecting sounds from the all-time-encompassing atmosphere, the sound piece will include field recordings from the current HAU2 construction site. In doing so, The Ghost Zoo aims to capture the ghosts of the past and create an experience of a longer “Now” from the times of the Zodiak until today.
Galina Ozeran, more known as Chikiss, is a singer and pianist, composer and electronic producer. Having recorded her first album in 2005, she has produced a large musical output from post-punk and psychedelic rock to minimalistic synthesizer pop and avant-garde electronic music. As a solo artist and in various collaborations with others musicians and artists Ozeran has created her personal and idiosyncratic style. Together with Etkin Çekin she forms the duo God Is God.
Etkin Çekin, known by the recording alias Et Kin, is a musician, multi-instrumentalist and producer of experimental music. Currently based in Berlin, Çekin is active in God Is God with Galina Ozeran from which their debuting album named “Metamorphoses” is soon to be released on the electronic label Bureau B.
Sebastian Lee Philipp records and performs music under the name Die Wilde Jagd. He has released three studio albums: “Die Wilde Jagd” (2015), “Uhrwald Orange” (2018) and “Haut” (2020). For HAU Hebbel am Ufer he has previously created the audiovisual piece “Haut Ontogenesis”, presented in 2020 as part of #HAUonline.