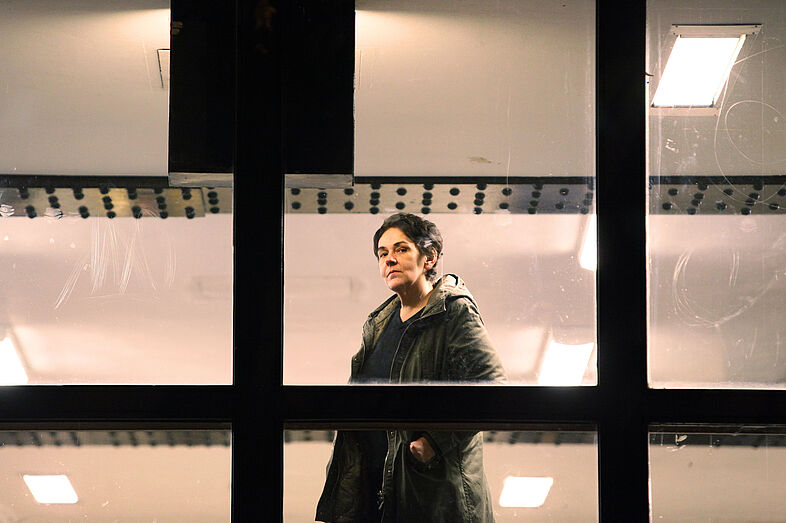 Anyone walking down the street in Kreuzberg with Christiane Rösinger will often be stopped. By fans thanking her for unforgettable song lines like “Pärchen verpisst euch, keiner vermisst euch!” (“Couples, fuck off – No one will miss you!”). By rent activists discussing the latest gentrification developments with her. By bouncers who want to invite her to their club. Or by old scene acquaintances who simply want to know what's been going on lately. For almost four decades, the musician, author and theatre-maker has resided in the old West Berlin neighbourhood of SO 36, and as a transplant, she embodies like no one else the spirit of what was probably Germany's last left-wing utopia. With biting irony, literature-fed melancholy and a good dose of biographically- and politically-based spirit of resistance, Christiane Rösinger handles all the hot potatoes – from tenants' rights to class struggle to cis-hetero norms to feminist utopias – in her songs, lyrics and stage productions. The fact that they all end up as great, bittersweet entertainment is not only due to her Baden wit, which she has retained over the years as a Berlin scene great, but above all to her stature as a terrific performer.

It was already clear back then that neither her parents' field nor the peaceful town of Hügelsheim were worldly enough forums to offer her a suitable stage for her artistic qualities. After an apprenticeship as a bookseller in neighbouring Rastatt, Rösinger moved as a young single mother in the mid-1980s to Kreuzberg, where there was music, light and life. Alongside her studies in general and comparative literature, she quickly made a name for herself in the alternative music scene surrounding the venue Fischbüro. In 1988, she founded the band Lassie Singers along with Almut Klotz, also from Baden, and Funny van Dannen. Years before German-language pop by male bands dubbed “Hamburger Schule” was hailed by critics as the next big thing, Rösinger and the Lassie Singers created the genre of ironic, discursive, Schrammelmusik-influenced indie pop with German lyrics and addictive hooks. Although the band were rather neglected in music journalism despite or probably because of their major-label contracts, lines like “Mein zukünftiger Exfreund” (“My future ex-boyfriend”) and “Liebe wird oft überbewertet” (“Love is often overrated”) are now part of the canon of German-language pop lyricism as they are dropped in everyday conversation. After the Lassie Singers stopped in 1998, Rösinger founded the band Britta, whose songs were still ironically pointed but altogether more melancholy, as well as the feminist music label Flittchen Records. In the 00s, she devoted herself more to journalistic writing, publishing the first of her four books to date in 2008; from the 10s onwards, she emerged as a solo musician, working with Andreas Spechtl of Ja, Panik. With the song “Eigentumswohnung” (“Condominium”), released in 2016, she laid the blueprint for her first directorial work for HAU Hebbel am Ufer: the song, which addresses the inequality of inheritors and the destitute as well as the increasing displacement from gentrification in her usual biting way, polished up the term “Klassenhass” (“class hatred”) – which till then had been successfully maligned by neoliberal, individualist rhetoric as jealousy – with a shiny new fighting stature. After the success of her musical on the housing crises “Stadt unter Einfluss” (“City under Influence”), for which Rösinger collaborated with tenants' rights activists in 2019, her feminist Singspiel “Planet Egalia”, with a look at past utopias of the future, now explores contemporary questions of gender equality. As always with Rösinger, joined by a diverse community of musicians and performers on stage, the audience doesn't get a dry lecture bur rather brilliant entertainment – or, in the absolute best sense of the word, edutainment.

The musician and author Christiane Rösinger moved to Berlin in 1985, where she founded the bands Lassie Singers and Britta. The themes of her books and songs include criticism of couples and capitalism, precarious life versus Bohemian concepts and practical feminism. The city of Berlin has inspired her with the setting for novels and columns as well as lyrics and theatre texts. Over the course of years making music and working as a journalist, Rösinger has always placed an importance on creating local infrastructures to promote younger musicians and to counter the male-dominated music business. In the 90s, she organised the legendary event series Flittchenbar in Maria am Ostbahnhof and, after a long break, resurrected it in Südblock at Kottbusser Tor. Due to her strong personal and artistic connection to the city, the housing crisis almost forced itself upon her, finding expression on the album “Lieder ohne Leiden” (“Songs Without Suffering”), released in 2017, with the song “Eigentumswohnung” (“Owner-Occupied Flat”) about housing and class relations.

The stage production “Stadt unter Einfluss – das Musical zur Wohnungsfrage” (“City under the Influence – The Musical on the Housing Issue”), presented by HAU Hebbel am Ufer in 2019 as part of the festival “Berlin bleibt! Stadt, Kunst, Zukunft” (“Berlin bleibt! City, Art, Future”), was Rösinger's first work as a director. It was hailed as “community theatre in the best sense” by audiences and the press alike. Continuing from this successful collaboration, Christiane Rösinger in 2021 develops a new musical for the stage of HAU Hebbel am Ufer: “Planet Egalia – A Feminist Ballad Opera”.