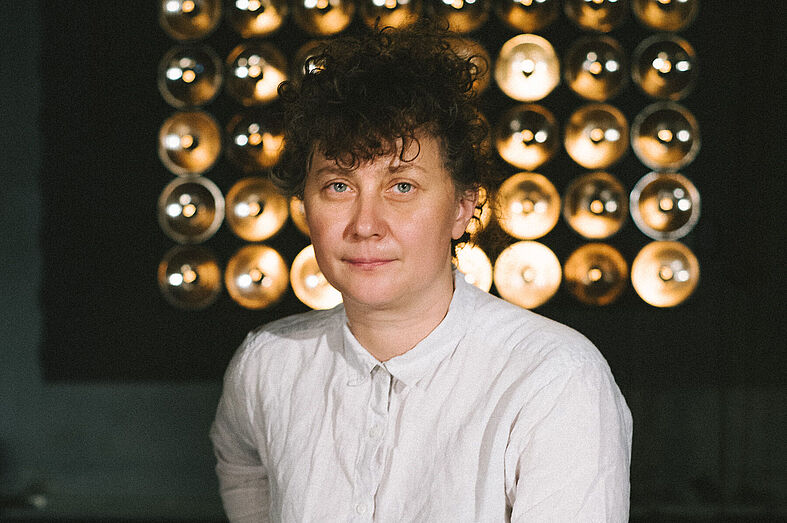 In 2005, she became known for her monolog “Fuck You, Eu.ro.Pa,” which largely dismisses both the nationalism of the former republics of the Soviet Union and Western capitalism. At the time, her language was perceived as rather drastic, as enraged and tough. And yet many of her pieces, such as “Dear Moldova, can we kiss just a little bit?,” which uncover the concealment of divergent sexual orientations in both the past and the present, are touching precisely because of their language’s tenderness. In “Life,” a constantly breaking phone line remains the last connection between an elderly lady, who has stayed in her occupied hometown during the political crisis in Ukraine, and her daughter, who has left her home. The piece emphasizes that the ability to speak to one another is a precious gift that is all too often risked when neighbors become enemies, divided up along ethnic borderlines.

Nicoleta Esinencu (*1978, Chișinău, USSR / Republic of Moldova) lives and works as a writer and director in Chișinău. Her much-discussed theatre projects consider the social reality in the Republic of Moldova and the contradictions of the post-Soviet era from the critical point of view of pan-European history.

After a scholarship to the Akademie Schloss Solitude in Stuttgart she became internationally known with “FUCK YOU, Eu.ro.Pa!” and won the Romanian dramAcum theatre prize. The text was published in 2005 in the reader of the Romanian Pavilion at the 51st Venice Biennale. Esinencu has often been a guest of the Leipzig Book Fair and the international literature festival berlin. In 2009 she was invited by the Goethe-Institut to take part as one of 16 playwrights in the project “After the Fall – Europa nach 1989”.

In 2010 Esinencu co-founded the independent initiative teatru-spălătorie, which grew from the need to create an alternative art space in Chișinău where artists could respond to the political and social events in the Republic of Moldova. Because the venue had to close in 2017, the women’s collective teatru-spălătorie has continued its work without a stage since then.

HAU Hebbel am Ufer is in continual collaboration with Nicoleta Esinencu and teatru-spălătorie. They were invited to Berlin for the first time in 2012 with “Clear History”, which was shown at the festival “Many Years After …” They subsequently presented “Good Guys Only Win in Movies” (2014), “American Dream” und “Dear Moldova, can we kiss just a little bit?” (with Jessica Glause). In 2016 the commission “Life” premiered at the HAU festival “The Aesthetics of Resistance – Peter Weiss 100”. The co-production “Requiem for Europe” was shown at HAU as part of “Comrades, I am not Ashamed of my Communist Past”. The international co-production, “The Abolition of the Family”, has once again been commissioned by HAU Hebbel am Ufer. Nicoleta Esinencu has been a guest of the DAAD Artists-in-Berlin Programme in June 2019. The current co-production “Symphony of Progress” (2022) is again a commission from HAU Hebbel am Ufer.