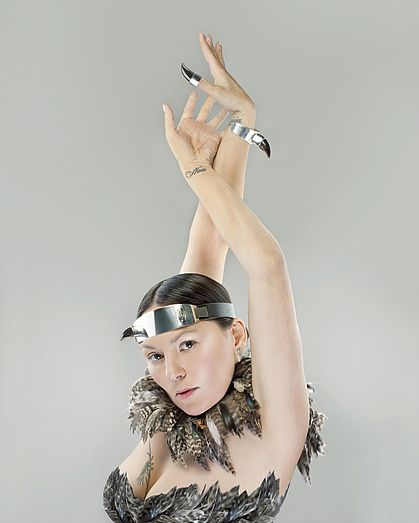 This evening presents a repeat performance of CTM 2017’s Opening Concert, uniting two powerful yet very different female voices that challenge some of the inequalities, obstructions or latent power structures that surround us.

Tanya Tagaq is a Canadian Inuk throat singer from Cambridge Bay, Nunavut. Through guttural groans, colossal breathing, and deeply spiritualistic performances, she translates ancient vocal traditions into a postmodern language. She approaches politics as directly as she does sound, understanding art as a weapon with which to fight for women’s and indigenous rights. Her appearance will commemorate the October 2016 release of her album, Retribution.

Joining Tanya Tagaq for the Opening Concert is spoken-word artist Nora Turato, known for her stream-of-consciousness “verbal vomit”. Her performances confront and engage the audience in dialogue and address a wide range of the issues haunting modern, globalized life.

CTM Festival returns to HAU Hebbel am Ufer from 28 January to 5 February. A major aim of the CTM Festival since its inception has been to make space for radical forms of musical expression and dissonant emotions. Under the title FEAR ANGER LOVE, CTM 2017 will focus explicitly on such emotions found in or through music and will examine the diverse strategies that are applied to unleash or harness them. With special projects and commissions, performances, an intensive daytime programme and an outlook that continues to search the fringes of current music geographies, CTM 2017 will examine the unhinging and emancipatory potential of resonant (musical) emotion to recurrently question and challenge the status quo.