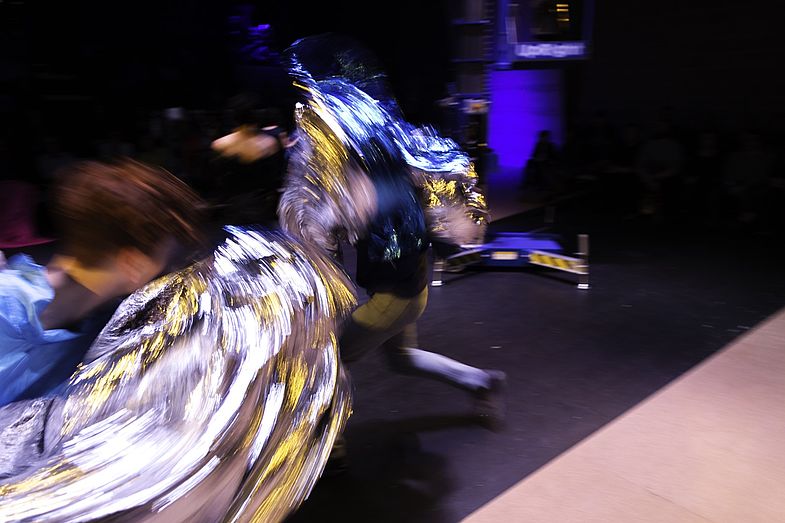 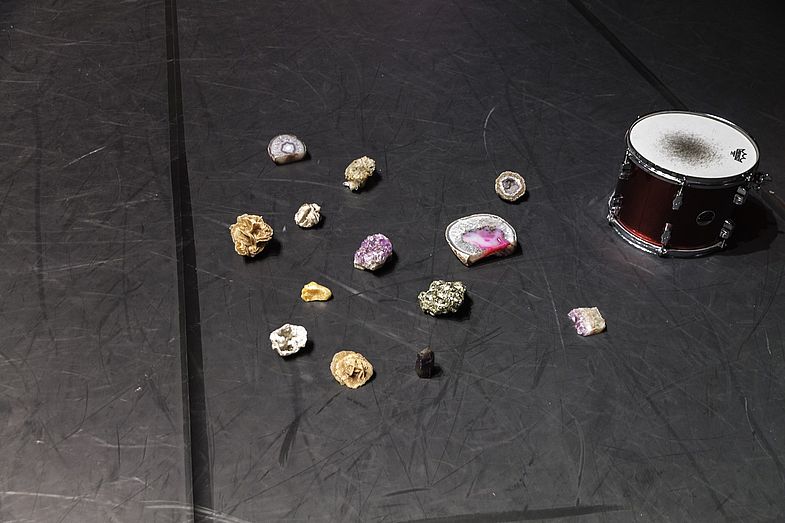 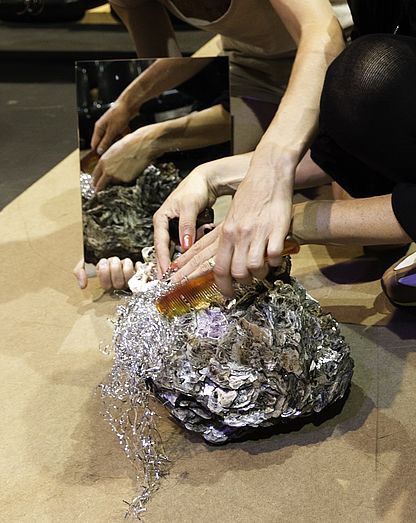 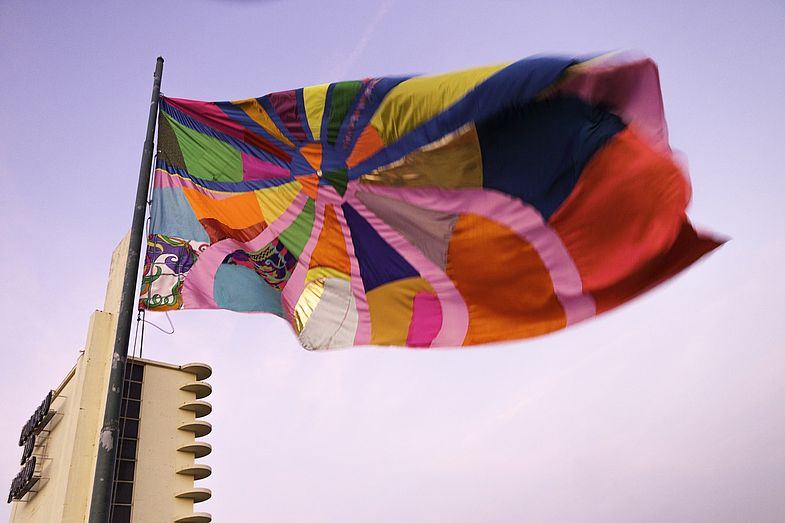 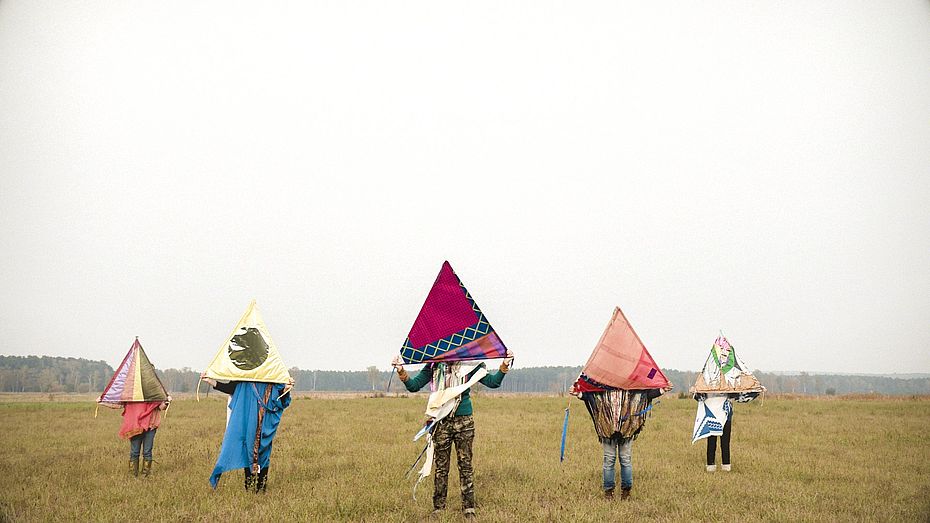 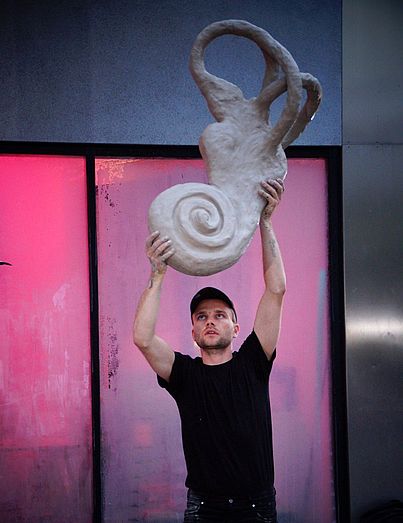 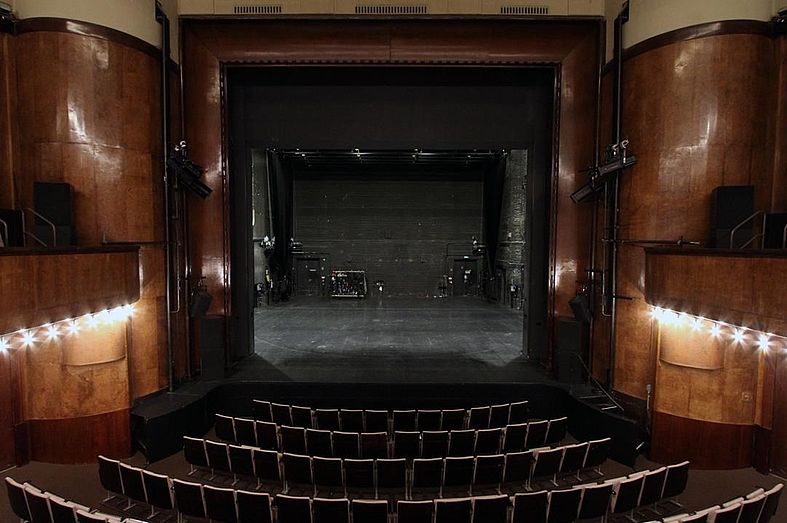 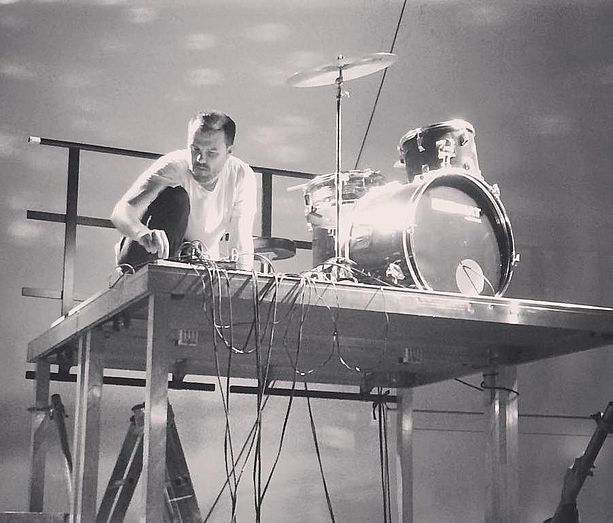 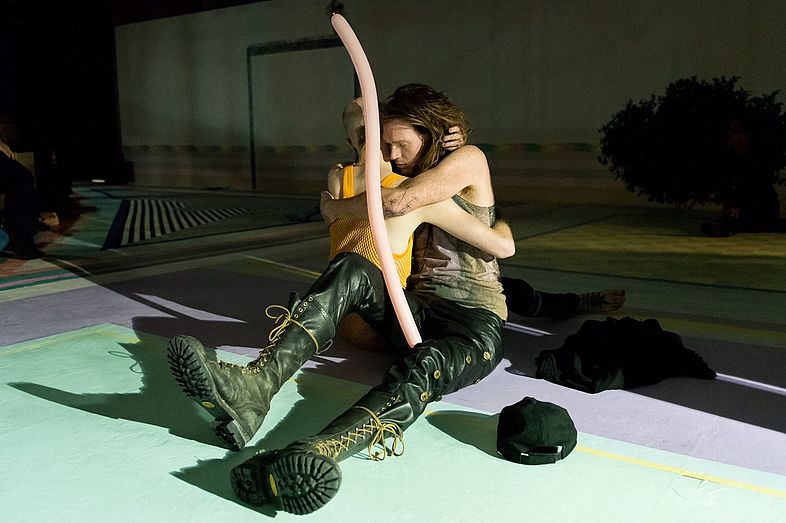 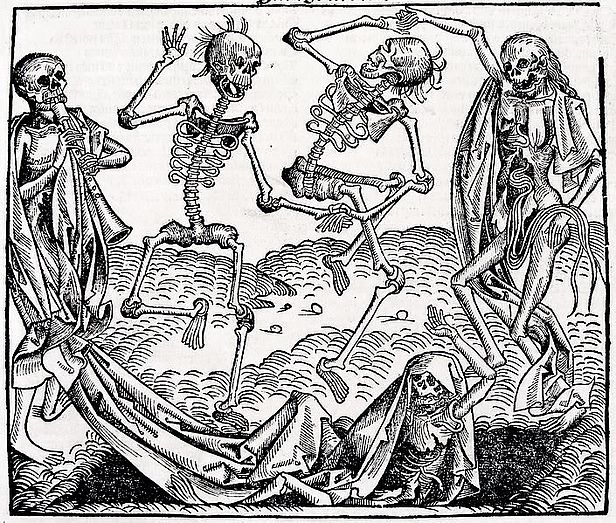 Figures in fantastical costumes, moving sparkling stones and words: “Sketches/Notebook” was created in January 2013 resulting from an invitation by HAU Hebbel am Ufer. The choreographer and dancer Meg Stuart led various artists to bring their different talents, backgrounds and abilities into a process of developing common proposals. From their sketches and intimate investigations arose a pulsing world of light, music, objects and gestures on stage – an exuberant laboratory for testing boundaries.

After five years of touring the group is now coming together again for two weeks at the place where it all began to create an expanded version of “Sketches/Notebook” next to carrying on with other projects – from glittering parades and a motor vehicle transforming into a clay sculpture to a poetry-reading. Under the titel “Supernova,” after the astronomical phenomenon in which a star explodes, briefly blazing more brightly than ever before, this project expands in just that way, sounding out boundaries and bringing a variety of art forms to­gether in a collective ritual.

”My flags are signaling devices that work where communication is challenged. I create the flags for “Supernova” to send out visual signals in response to the very volatile current state of affairs. Where other channels of communication fail, my vexillography carries the semantics of planetary care, unity, empathy, love, truce, truthfulness, and embrace of reality for the sake of evolution. Under careful consideration of these messages, I compose the flags from found and vibrant cloth, through which the traces of history and the passing of time can be sensed. The first flag was created upon invitation by Mezzanine in Porto where it was installed on top of the building of Maus Hábitos - Espaço de Intervenção Cultural and will be brought to Berlin by Ana Rocha. Collectively, the group will host the flags to mark our move-in at HAU Hebbel am Ufer.” (Claudia Hill)

A group of travellers of unknown origin arrive out of nowhere into an open landscape. Over the course of a day, they explore and scan the environment with their unique handmade triangular antennae. Through their sensual decoding of information and hypnotic choreography of sign language, a necessity of care for this strange and beautiful planet emerge

“This is a movement session held in the set of “Sketches/Notebook.” It lasts around two hours and is open to any moving body. Some touch will be involved as a warm up tool and it might get hot, so you might need something to change into, something comfortable. You can bring clean sneakers if you mind bare feet. There is no shower possibility.

The central activity is a dance mediation on equality and dying called “Totentanz” developed after Stephanie Maher’s psychic jogging.

This is a live diorama and a prayer by heretics, joining in a polyrhythm of dancing and building. If you cannot jog or run or roll, you can walk at a slower pace. If you can only sit or be in one place, you can join and experience it energetically. You can always build - all materials will be light and easily connected.” (Maria F. Scaroni)

At the top of the stairs in the studio of HAU2, hums a satellite laboratory for queerly conceiving new life. Tubers, seedlings and grafts from the collection “Culture, Administration & Trembling”, such as “Male Breast Feeding” (2014) “Algorithm for 6+1” (2014) are proposed by Antonija Livingstone: practiced and exhibited real time. “No new ideas and only aging bodies” are lovingly nourished by the fertilizer, heat and light of “Sketches/Notebook” (2013) practiced by the Supernova ensemble and local guests.

A remedial space created by and with: Antonija Livingstone & Supernova
Sound-Installation: Brendan Dougherty

Vladimir Miller: Your house doesn’t love you like I do
text, water, mixed media

“In a house rain flows down the roof, water is provided through pipes, fluids leave the building in orderly fashion – architecture is built to control, regulate and exclude anything that is fluid. Leaks, spills, water seeping through walls and ceiling are small catastrophes, not only to the building itself but to the very paradigm of what architecture is supposed to be. A wet stain is a blooming proof of something having gone awry, it signals a breakdown not only of physical, but of the institutional structure as well. It calls for a managed effort of maintenance, for a sorting of the elements back into order. Fluids and the ways in which they merge, mix, penetrate, seep through, and enter where they are not supposed to go challenge our ideas of borders, stability and safety. Fluids seem to carry with them their own ways of negotiating and producing territories, ways that are foreign to us, ways which go against our concepts of structure and permanence.” (Vladimir Miller)

“'Sketch for a Parade' is a two-hour building score with materials and objects. It is a collaborative, chaotic space in the making which is trying to move from one end of the room to the other. An accumulation of simple connections, support structures and performative gestures from the Supernova ensemble, “Sketch for a Parade” is a shared construction effort for an unstable moment of being together.” (Vladimir Miller)

Inspired by J. G. Ballard's 1973 novel “Crash”, ”The Bony Labyrinth” explores an ambiguous relationship between human and material bodies. Over long duration and located in a public space the performers model a large amount of clay onto a car, which converts into an exhibition display. Framed by the logistics of a film set, slowly a holistic sculpture grows, which tangles concrete historical references, organic formations and contemporary elements. While the performers lecture academic text addressing the collision between human and material bodies, the decelerated actions are framed and dramatized by theatrical effects such as wind, smoke and light. Sensitive microphones intensify the interactions between the various materialities, which are processed live by a sound artist and create an amplified audio-haptic experience.

With the technical means available in the room and selected materials used in ”Sketches/Notebook" – lighting instruments, a smoke machine or a Genie-lift as examples – an in-situ performance is created for which the space itself is fundamental – which also explains the seemingly arbitrary title. “HAU1” stands for a complete audiovisual experience, a performance without human performers and a concert without musical instruments. The leading roles in “HAU1” are played by the technical media. Utilitarian objects come to life on stage. A microphone hung on a cable swings around like a snake, or two monitors carry on a wordless conversation by rolling towards one another or by flashing on and off. Moreover, the room takes on unexpected personal traits: a wall light suddenly illuminates a hollow space, in the ceiling, the fluorescent lights are bickering, flicking nervously. In this mechanical ballet, technical materials - ready-mades – are made anthropomorphic. Together with the space, they become a unified, living organism. Every bit as important as the visual aspect of ‘HAU1’ is the musical experience it generates. Orchestrated action of the equipment and the technical functions of the room produce sound, simultaneous with their deeds. The microphone circling the stage, for example, produces a swelling crescendo, a shrill feedback; the flickering fluorescent lights soft zooming tones. All the sounds are brought into a minimalist, electronic composition in a live performance. But at the same time, its built forth on the tradition of mechanical music and performance.

Production: HAU Hebbel am Ufer. Funded within the framework of the Alliance of International Production Houses by the Federal Government Commissioner for Culture and the Media. In co-operation with Tanzfabrik Berlin, supported by apap advancing performing arts project - Performing Europe 2020. With support of PACT Zollverein.