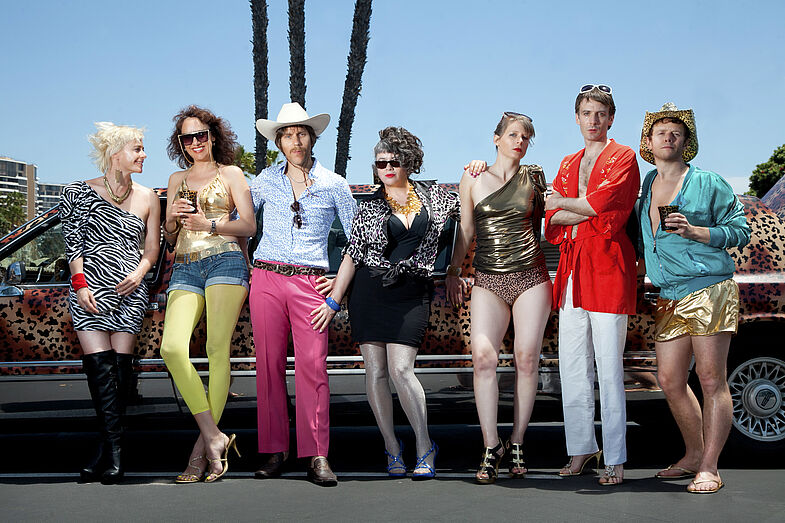 Gob Squad is a seven headed bisexual, binational and bilingual (English/German) arts collective. They have been devising, directing and performing together since 1994, working where theatre meets art, media and real life. Gob Squad have been searching for new ways to combine media and performance, producing stage shows, video installations, radio plays, interactive live films and urban interventions.
Always on the hunt for beauty amidst the mundane, they place their work at the heart of urban life. Everyday life and magic, banality and idealism, reality and entertainment are all set on a collision course and the unpredictable results are captured on video. Thereby they empower audience members to step beyond their traditional role as passive spectators.

Gob Squad was founded in Nottingham in 1994, whilst its members were still at Nottingham Trent and Giessen universities. Berlin has been the group’s creative home since 1999. Core members are Johanna Freiburg, Sean Patten, Sharon Smith, Berit Stumpf, Sarah Thom, Bastian Trost and Simon Will. Other artists are invited to collaborate on particular projects. The group is managed by Eva Hartmann.

Gob Squad’s international reputation has grown steadily since coming to prominence at documenta X in 1997.

Since many years HAU Hebbel am Ufer is their base in Berlin. In autumn 2014, they celebrated their 20th anniversary as an arts collective here. As co-producer, the production house is involved in the development of new works; the HAU commissioned work “Show Me A Good Time” was invited to the Berlin Theatertreffen in 2020 and also received the Friedrich Luft Prize in 2021. In November 2021, the HAU co-production “1984: Back to No Future” will celebrate its Berlin premiere.

In the series “Postdramatisches Theater in Portraits” (Postdramatic Theatre in Portraits), Alexander Verlag published “Gob Squad - What are you looking at?” edited by Aenne Quiñones (deputy artistic director of HAU).