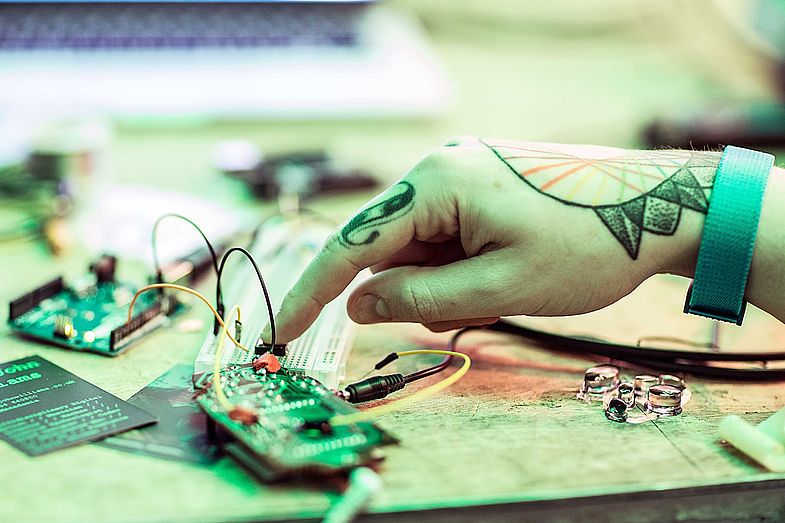 The MusicMakers Hacklab is a weeklong open, collaborative laboratory hosted by Peter Kirn of Create Digital Music and musician and Polish electronic-noise artist Ewa Justka. Guest artists throughout the week share skills in how instruments are made – both traditional and new. Notable input is received from gamut inc, and Wukir Suryadi, one half of the Indonesian music project Senyawa, who lead participants in learning music making techniques from Javanese tradition, fused with garage distortion into new forms.

Now entering its 3rd edition within the CTM Festival, Hacklab engages in producing cross-cultural hybrids that imagine future topographies of sound and music performance through its "Future Rituals" theme, re-educating our electronic selves in the potentials of near and distant traditions, systems of musical representation and structure, and performance techniques. The theme for experimentation is a kind of ethnomusicology for machines.

The culmination of a week of collaborative development at the MusicMakers Hacklab sees participating artists move from the laboratory to the performance venue. Just-created performance designs, circuits, code, and ideas will be put to the test in front of a live audience as a multidisciplinary group of creative performers share the work they've constructed over the course of the CTM festival week. Expect new work in live musical performance, movement, visuals, and surprises.


CTM Festival returns to HAU Hebbel am Ufer from 30 January to 7 February. The 17th edition’s music programme is elaborated through intensive collaboration with guest co-curator Rabih Beaini, while the exhibition and discourse programme is created in close collaboration with Swiss-based Norient. Special projects and commissions, as well as artists and sound cultures emanating from less familiar countries and localities and often operating on the fringes of the electronic circuit are featured in greater numbers than ever before. Under the shadow of a global conflict centered on increasingly radical disputes over drawing or dissolving borders, the festival’s “New Geographies” theme aims to explore music and sound practices that respond to these developments, and to provide the conceptual tools needed to approach the complexities of a polycentric, polychromatic, and increasingly hybrid (music) world with greater openness.

The MusicMakers Hacklab at CTM 2016 is supported by Native Instruments and the SHAPE platform.