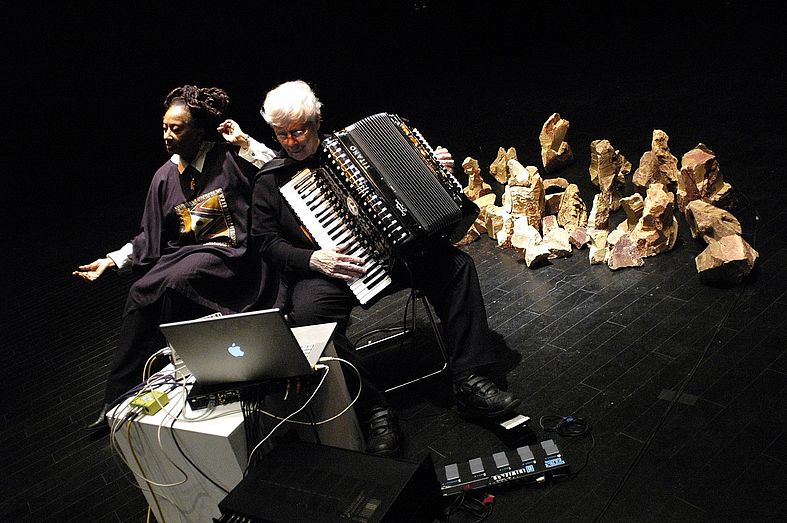 American composer and instrumentalist Pauline Oliveros’s ground breaking work in tape, electronics, and improvisation and her related writings and theory since the 1960s have earned her recognition as one of the most important voices in avant-garde electronic music. She performs with electronics and accordion, which she has played from a young age, often also making use of a signal processing system she developed, called the Expanded Instrument System (EIS). Influenced by Eastern philosophies, Oliveros’s ideas reach far beyond Western music tradition and have pioneered new ways of thinking about sound, significantly contributing to the theoretical cannon surrounding the concepts of sonic affect and transcendence. Her writing about “deep listening” proposes that concentrated emotional and corporeal attunement to sound can bring about transcendent and transformative experiences, and her theory of “sonic awareness” describes the act of focusing attention, over an extended duration, on an environment’s aural characteristics.

For her multichannel concert at HAU Hebbel am Ufer, Oliveros will perform on V-accordion through her EIS, joined by word artist Ione, who will deliver improvised vocals. Ione is a noted author, playwright/director and word/sound artist who has been working and performing internationally with Pauline Oliveros since 1986. Inspired by the sound and feelings of the moment, the brand new improvised piece harkens back to the same duo’s “Water Above / Sky Below; Now”, recently released on the Morphine label, and takes on a name in the same vein: “Mountain Above / Fire Below; Now”.

Oliveros will make a second appearance at CTM performing together with Lebanese Trumpet player Mazen Kerbaj and Irish improviser and composer Karen Power, preceded by an artist talk in which Oliveros shares the thoughts and philosophies that have shaped her work over the years. Later in the week, on 6.2., Oliveros invites the audience to “Listening for Piece”, a one hour long musical meditation. All proceeds from “Listening for Piece” will be donated in support a neighbouring refugee shelter.