A Plot / A Scandal 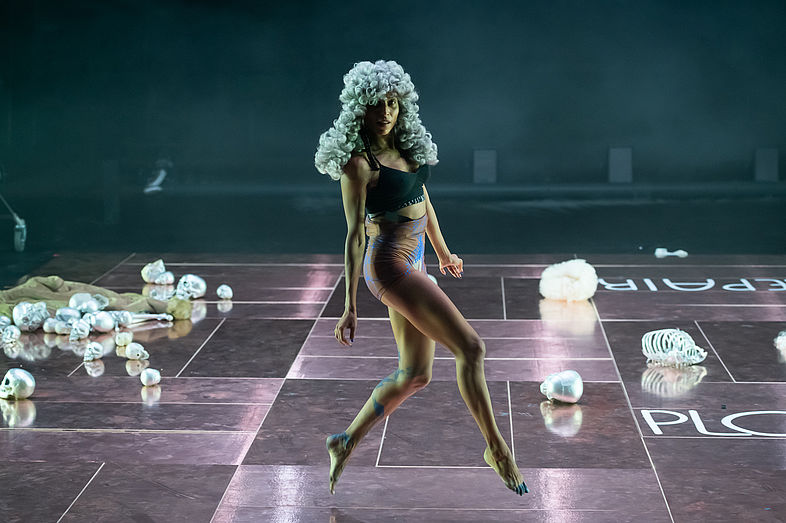 The word “plot” refers not only to the action of a story but also to a piece of land, depending on the context. It can also be a verb: to scheme, possibly endangering the existing order – which has led Ligia Lewis to position scandal as a cultural manifestation. Scandals are incidents of disruption where fantasy and pleasure take centre stage. Guided by the questions for whom this pleasure is for and at what expense, as well as where the connecting lines between scandal and plot run historically, Lewis's new plot explores the stage where scandals abound. Weaving together historical, anecdotal, political and mythical narratives − ranging from an interest in the Enlightenment thinker John Locke, Maria Olofa (Wolofa) in the slave revolt of Santo Domingo in 1521, and Lewis’s great grandmother, a figure Lewis turns to within her plot as a guide of resistance − the choreographer and dancer constructs the poetics of refusal at the edges of representation. A dance between affect and embodiment, seeing and being seen. As is so often the case in Lewis's work, “A Plot / A Scandal” creates a space full of excitement, in which images emerge that have a resonance and express more than language can. These fantastically beguiling and at the same time repulsive visual worlds reveal the artist's high formal awareness.

After the premiere on 20.10.: Dance with us! Party at CAN with DJ Justin Kennedy
After the performance on 21.10.: Artist Talk with Ligia Lewis, Moderation: Sarah Lewis-Cappellari