Which me will survive / All these Liberations

With: Lerato Shadi | Bárbara Santos
Part of “Radical Mutation: On the Ruins of Rising Suns” 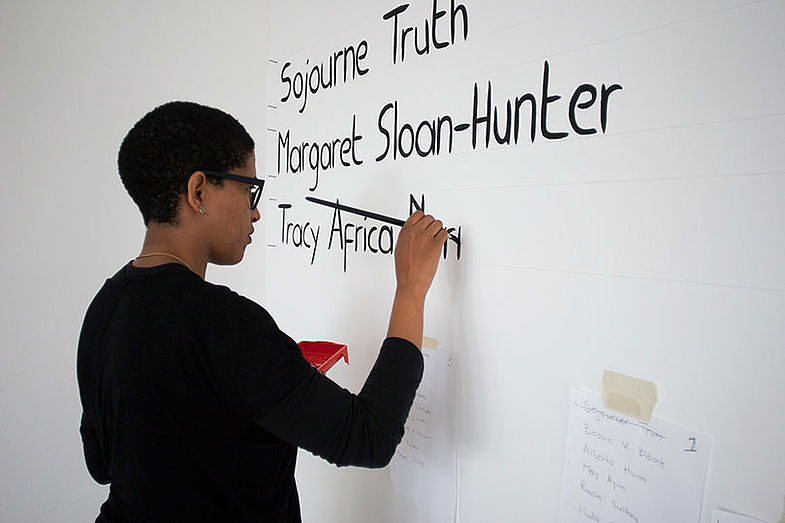 There are so many roots to the tree of anger
that sometimes the branches shatter
before they bear.

Sitting in Nedicks
the women rally before they march
discussing the problematic girls
they hire to make them free.
An almost white counterman passes
a waiting brother to serve them first
and the ladies neither notice nor reject
the slighter pleasures of their slavery.
But I who am bound by my mirror
as well as my bed
see causes in colour
as well as sex

and sit here wondering
which me will survive
all these liberations.

This evening invites two performers – Lerato Shadi and Bárbara Santos –whose work centers the Black female body as a main figure of narrative experience. The title of the evening references a poem by Audre Lorde, who regularly spent time in Berlin between 1984 and 1992, and played a central role in the emergence of the Black Women movement in Germany. In the poem titled “Who Said It Was Simple”(1973) she calls out the flawed notion of white(-only) feminism and the oppressive nature of limited liberation movements. Audre Lorde’s writing makes the Black female body a source and site of (written) subjectivity, through a deeply historical, racial, sexual, and political consciousness.

Lerato Shadi’s work across video, performance and installation, challenges Western notions of history and makes visible that which is invisible or overlooked. By placing herself at the forefront of her work, Shadi deals with the politics of cultural erasure and structural exclusion. She states: “It serves to challenge myself, and hopefully my audience as well, in how I/we are complicit in the violence of historical erasure by not fighting for a more inclusive and accurate historical narrative. I realised that—by just blindly or lazily accepting an inaccurate history—I would be sanctioning the problematic dominant narrative with my own inactivity.”

Bárbara Santos piece “Passage”, a one-woman show, is about finding yourself crossing. Walking the path of memories of poorly told stories and hidden histories. Perceiving where the physical and allegorical chains are lodged, those which imprison the colonized body and the subjugated soul it shelters. It is about recognizing and facing the fetters present in the subjectivity of avoiding the full experience of your being. Ultimately, it is about going through the colonized body to discover and liberate the political body.