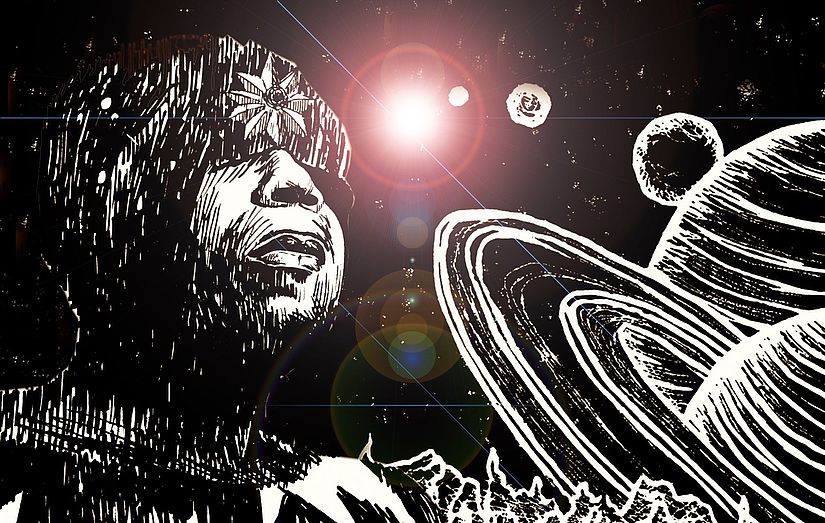 Le Sony'r Ra (aka Sun Ra) was a controversial artist, on the one side, because of his eclectic music and unorthodox lifestyle, on the other he claimed that he was of the "Angel Race", and not from Earth but from Saturn. Using "cosmic" philosophies and lyrical poetry that made him a pioneer of Afrofuturism, Sun Ra developed a complex persona. He preached awareness and peace above all. He abandoned his birth name and took on the name and persona of Sun Ra (Ra being the Egyptian God of the Sun).

His music ranged from keyboard solos to big bands of over 30 musicians and touched on virtually the entire history of Jazz, from Ragtime to Swing music, from Bebop to Free jJzz. He also used free improvisation and was one of the early musicians to make extensive use of electronic keyboards, which made him one of the pioneers of electronic music and so-called "Space Music." He was a huge influence upon artists like Afrika Bambaataa & the Soul Sonic Force, along with George Clinton & The Parliament Funk-a-delic, to name just two.

At HAU Hebbel am Ufer, Mike Huckaby & Richard Zepezauer will present another edition of THE SUN RA SESSIONS, an event series they have started in 2011.

Huckaby will play a unique set on reel to reel with edited classic tracks by Sun Ra himself. This Reel to Reel session will be followed up by two DJ sets from Richard Zepezauer and Lakuti translating the same Sun Ra vibrations through House, Techno, Jazz & Electronic Music.

Lerato Khathi aka Lakuti is the founder of Uzuri Artist Bookings & Management & Label. As DJ she pushes a sound deeply influenced by Soul, Funk, Jazz, South African Music and Chicago House. Together with her wife Tama Sumo, she runs the monthly party series "Finest Friday" at Berghain/Panoramabar.

Richard Zepezauer is a Berlin-based DJ and producer. He has been involved in several projects concentrating on classical music in a contemporary context working with unusual textures of sounds. His own label "n s y d e"  is a platform for diverse club music without genre constraints. For him music was always about imagining the future, exploring new fields of sounds and structures in offering new perspectives to the listener.

Detroit DJ, producer, sound designer and educator Mike Huckaby is known for his almost encyclopedic knowledge of music. He produces deep and soulful House and Techno music for his two labels "Deep Transportation" and "S Y N T H" and works as a sound designer and tutor for Native Instruments and Ableton, as well as for a special Detroit youth foundation project called "YouthVille".

Presented as part of „Detroit-Berlin: One Circle“, a festival by HAU Hebbel am Ufer. Supported within the framework of the Alliance of International Production Houses by the Federal Government Commissioner for Culture and the Media.