On Collectivity, and Its Boundaries – Day 1

Part of “Violence of Inscriptions. A project by Sandra Noeth and Arkadi Zaides” 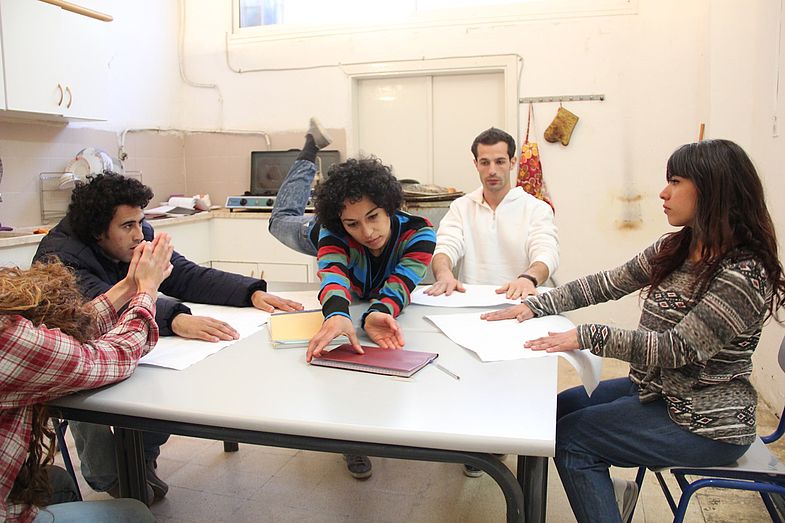 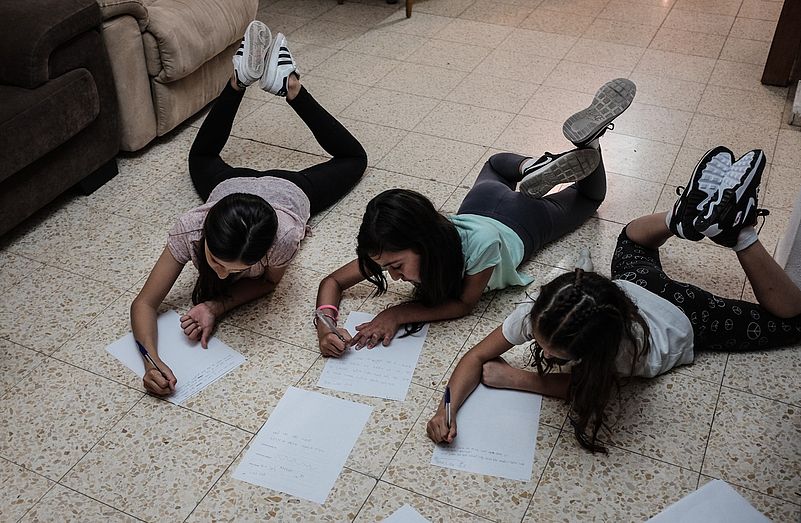 Cells of Illegal Education (C.I.E) is a video dance installation that revisits gestures of civil disobedience carried out during the First Intifada in Occupied Palestine. More specifically it reenacts, transforms and deforms gestures exercised by Birzeit University students between 1988 and 1992 while trying to continue their education process at a time when schools and universities were closed by Israeli military rule and students and teachers who refused to abide were labeled “Cells of Illegal Education”. The illegal classes were organized in alternative spaces, such as houses, the university entrance and the university itself. The video revolves around two group pictures and a painting documenting these three situations. It attempts to recreate the students acts before, during and after the pictures were taken. Intertwining archival materials, oral testimonies and imagination this installation is a gestural reflection on the phenomenon of civil disobedience and popular resistance during the First Intifada and their echoes in our contemporary times, from romanticism to reenactment.

Sandra Noeth and Frédéric Pouillaude: Two Lectures and a Dialogue

What does it mean to think of oneself as a part of a larger, of a collective body? What kind of violence, directed towards the outside as well as to the inside, do we encounter when preserving and perpetuating our communities?
In two short lectures and a dialogue philosopher Frédéric Pouillaude and dramaturge and researcher Sandra Noeth will investigate into the indissoluble and disquieting movements of collective inscriptions. Looking into the history and practice of choreography, different ideas of an atomistic, individual body have been influential that imagined the body as a bound entity. At the same time, they reveal the very unavoidability of dis-/identification with some sensation or conception of a ‘collective body.’ In this process of writing and un-writing collectivity, the body remains a primary place where the consequences and ultimately the violence of our choreographic and political inscriptions take shape.

The question of collectivity is at the core of the work of Berlin-based artistwin deufert & plischke who have explored for more than ten years now the principle of collective writing, of writing in common, in their choreographic work. Since Just in Time, the audience has been actively involved in the process, creating dance through writing and text through dancing. The project unfolds across three cities that are linked through their distinct histories of cultural migrations. By collecting letters from the inhabitants of these places, the artists gather the material for a collective act of moving together. Dance, here, appears in all its possible inscriptions: loving, charming, sexy, nasty, harmless, the last way out, a good-bye, an illness or a movement anticipating one`s death..  With the example of Just in Time, deufert & plischke will address issues of collective imagination that they connect to the idea of dancing societies.

The lecture presentation is followed by a dialogue between Kattrin Deufert, Thomas Plischke and Sandra Noeth.

The unescapable impact of radically changing global politics on individual and collective physicalities demands to see agency as strategically and temporarily located, rather than a centralized or decentralized locus of power. Past and recent political and cultural shifts thus ask from us to comprehend the ontological and epistemological potential of “in- between- ness”— the being between political sys¬tems, between discursive traditions (e.g. continental universalism versus US identitarian politics), between different national construc¬tions of dance practice and theory, and between the disciplined social body and its breakdown in moments of instinctual and autonomic physical response to violent imprinting. In- between- ness allows not so much a co- presence of different positions, but most importantly refuses to be inhabited. In other words, the temporariness of a stable position and hence the potential of in- between- ness destabilize agency. This raises the follow¬ing questions: When one works against or inside a dominant system and that system violently collapses, can there really be a momentary opportunity for the reinvention of agency itself? Or does the collapse leave only room for other agents to rush in and occupy the empty space, thus canceling out the potential for a momentary state of in- between- ness? What does agency become after the collapse has yielded change? What is thus the price for evacuating the center or dispelling the myth of the inherent democratic value of collective decentralization? And what is the role of choreography in response to these questions?

B’Tselem is the Israeli Information Center for Human Rights in the Occupied Territories. Since 2007, the organization has been operating its Camera Project, which distributes video cameras to Palestinians in high conflict areas in the West Bank. The project aims to provide an on-going documentation of human rights violations, and to expose the reality of life under occupation to both the Israeli and the international public.

Throughout the work process, Zaides reviewed and selected footage that was filmed by volunteers of B’Tselem’s Camera Project. On stage, he examines the bodies of Israelis as they were captured on camera, and focuses on the physical reactions to which his own collective body resorts in various confrontational situations. The Palestinians remain behind the camera. Nevertheless, their movements, voices, and points of view are highly present, determining the viewer’s perspective. Zaides extracts and appropriates gestures and voices of the Israelis who are displayed in the footage and engages and gradually embodies them. The mimetic choreographic practice raises questions of participation and responsibility as Zaides’ body transforms into a living archive.