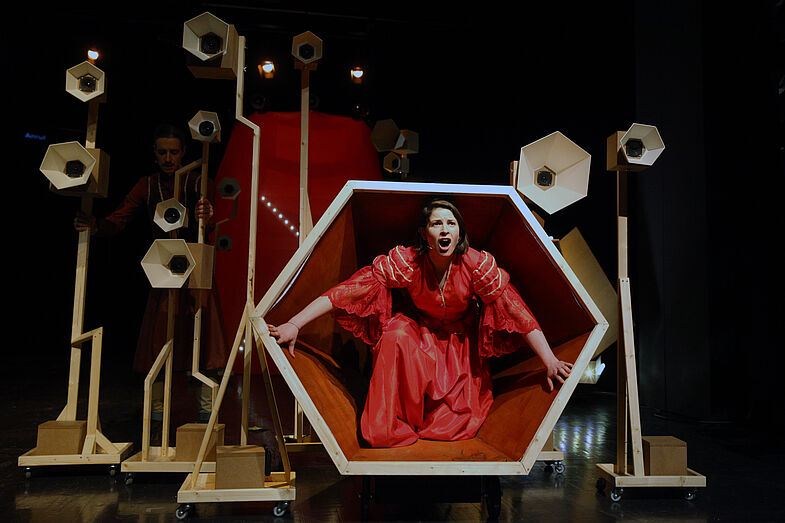 The theatre group FUX, consisting of Nele Stuhler, Falk Rößler and Stephan Dorn, was formed in 2011 within the framework of the study programme in Applied Theatre Studies at Giessen. FUX seeks to find new theatrical forms by taking already existing stage formats and putting them through their own filter, turning them into something unique. This observation of the second order gives rise to other performative spaces that they explore in order to develop an exciting aesthetic for the questions of our time, while always taking great delight in play and experimentation. They combine elements from performance, (live) music, spoken theatre, cabaret and choreography into complex and entertaining “theatrical bastards”. Their works have been seen at Treibstoff-Theatertage Basel, Stadttheater Gießen, Munich Kammerspiele, Mousonturm Frankfurt, Kaserne Basel and Theaterdiscounter Berlin. Most recently they produced “FROTZLER-FRAGMENTE” at the Schauspielhaus Wien in 2017, which is dedicated to the utopia of an economy without money and takes the form of the political revue. In 2014 and 2016 they were nominated as best German-language young artsts in the critics’ survey by the magazine “Theater heute”. In 2016 FUX was awarded the first Ponto Performance Prize from the Jürgen Ponto Foundation for their work to date. “Die Wiederentdeckung der Grantleroper” was FUX’s first production at HAU Hebbel am Ufer.