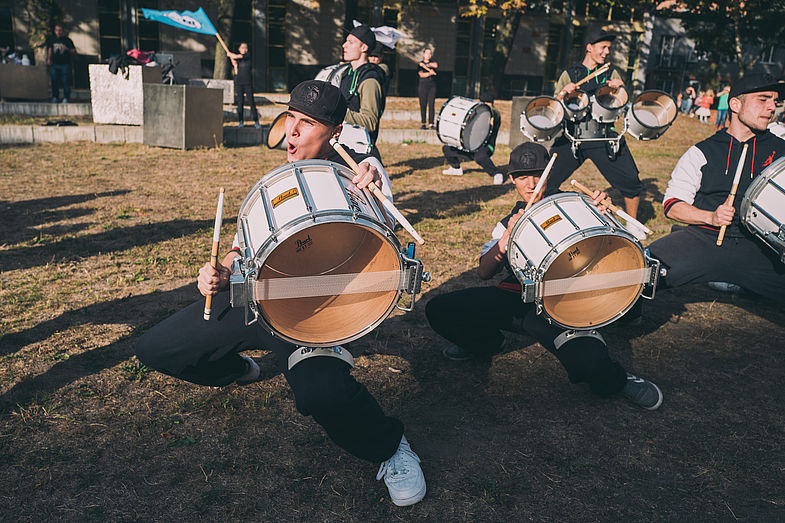 The festival “Berlin bleibt!” will end in a large neighbourhood party. In the afternoon the former post office will turn into a meeting point for families, friends and neighbours. There will be music to listen to, play, and dance to, and there will be plenty of eating and drinking. The city belongs to us all – so bring everybody along! BÄM!, the first Berlin Academy for Marching Drums will play one of its appearances; the girls rap group Sisterqueens will perform some tracks that came about in collaboration with the group ongoing project; two bands from the Kreuzberger Musikalischen Aktion (Sick Berlin Trash and CubeX) from Mehringplatz will appear; the pop musicians Ramin Bijan, Maurice Summen and Johannes von Weizsäcker will present their children’s music project Baked Beans; Fatih Hatipoglu & Ahmed Lalli will perform one of their legendary Panna-Street-Soccer-Games. In addition Medhat Aldaabal & Ali Hasan from “Dabke Community Dancing” invite everyone to dance and the neighbourhood project of Mehringplatz K A N T I N E Kreuzberg will be offering food. The Amerika Gedenkbibliothek at Blücherplatz goes out into the neighbourhood: With their bicycle-powered mobile Theme Room, the Zentral- und Landesbibliothek Berlin (ZLB) shows what they’ve got going on, and is looking forward to meeting its neighbours in Südliche Friedrichstadt.The artistic works that could already be seen in the post office over the previous days will continue to be shown. Bring your families, friends and neighbours along!

For the workshop afterwards, nine city and tenant initiatives will come together to work on concepts for the future and for the de-privatization. What will we do with the apartments when they belong to us? How can we find structures to reorganize housing democratically?