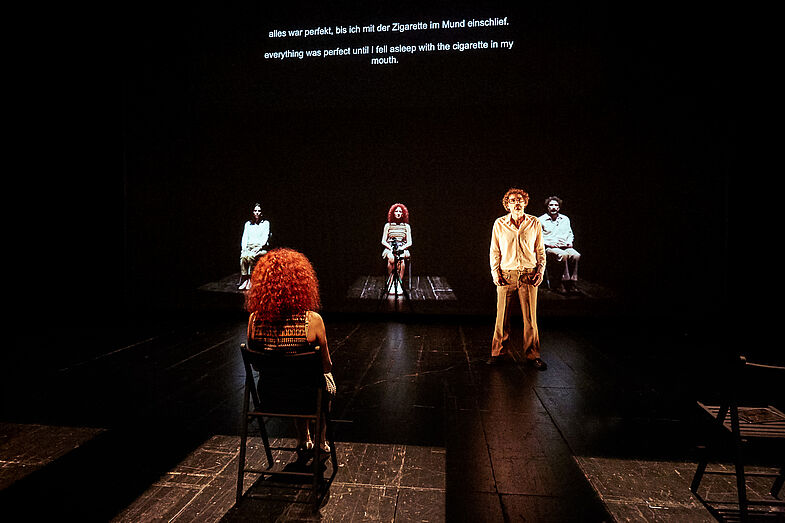 “What should we remember, what better forget?”

In the summer of 2012, Rabih Mroué showed a piece in Berlin that encapsulates the central motifs of his work at large: “Double Shooting” is not a production in the classical sense, as it does not work with performers. Blurring the lines to the visual arts, the installation was also exhibited at the 2013 Documenta. Mounted on a narrow row of columns, an 18-second film sequence that is cut into single shots can be seen. If the audience walks past the columns fast enough, the single images merge and become one motion sequence. If it walks more slowly, however, the single image remains isolated. The film shows a uniformed sniper who, standing on a rooftop, fires at people demonstrating in the streets during the Arabic spring in Syria. The audience views the sniper from the perspective of the protester who films him with his cell phone camera. The perspective that the viewer of the installation assumes is, therefore, the same as that of the protestor who filmed the soldier. The sniper aims his gun at the protestor until their eyes meet. The next few images are smeared with blood and blurry from aimless jerky movements, as the sniper appears to have fired his gun. The crossing of these juxtaposed viewpoints proved deadly, one gaze eliminating the other. The gun, aimed at the camera, meets the camera aiming at the gun. This moment becomes a “Double shooting”. One shoots, the other is being shot, two juxtaposed concepts of politics confront one another. The one shooting exerts political-military power. The protestors stand for the polar opposite of this political concept. They expose their unprotected bodies to a situation where they are armed with nothing but their willingness to express their political goals in a collective demonstration. It is their attempt to use the means of the civil public assembly to solve political conflicts and to document and disseminate them through their own media channels.

In 2016 HAU Hebbel am Ufer showed works by both Rabih Mroué and Lina Majdalanie in the elaborate exhibition “Outside the Image Inside Us”. Pieces like “Riding on a cloud” from 2003, which were on display, tell the story of Mroué’s brother Yasser and their shared childhood experiences. We see old family photos, a delicate teenager playing the guitar: life seems good in these images. When on stage, Yasser Mroué tries to remember his earlier life. After having been wounded in Lebanon’s civil war, a bullet wound in the head that he barely survived, he has a difficult time to speak. His memory has been damaged. He shows his video films like remains of a former life that he wants to hold onto. It is a laconic production (and lovingly so). But the sober account suffices to show that this is what happens to people in a country rattled by civil war. It does not take more to damage a life. It can happen fast, in a way that seems both random and self-evident.

Political violence, its perception and documentation, is always accompanied by the question whether and in what ways one can transmit the experience of violence through art and theatre, particularly as violence is part of the process of perception itself. This essentially raises the question of the trustworthiness of memory, and of the accounts and documents that capture it. These are issues that Lina Majdalanie and Rabih Mroué tackle in their works. They often address themes, as in “Riding on a cloud”, that are based on their personal experiences. Mroué describes that they use these experiences as a “pretext” that helps them to negotiate political, social, and economic issues. They then go, as he says, through a very clear and conscious, even calculated process that has nothing to do with a narcissistic dwelling in feelings. One of the questions that reoccurs throughout his work is, as Mroué states in an interview: “What should we remember, what better forget?” And since the confrontation with one’s memory is always at the same time a confrontation with images and other documents, the work itself becomes a manifestation, a search for traces and an attempted reconstruction made visible and tangible. This becomes clear in a joint production by Lina Majdalanie and Rabih Mroué called “33 RPM and a Few Seconds” (2012). What remains of a life when a young Leftist activist in Lebanon takes his own life and states, in his suicide note, that his reasons were purely personal – what, in such a life, can even be called “purely personal” without any political reverberations? The semi-documentary reconstruction of the last few months of his life zooms in on the life and death story of a person in despair, and at the same time broadens the perspective to grant insights into a land deeply torn by many lines of conflicts.

Many of these two artists’ works reflect on the interdependence between artistic production and personal biography. In Lina Majdalanie’s monolog “Biokhraphia” (2002), this tension takes on an explicit dimension. Majdalanie plays an actress that interviews herself using a cassette recorder. Yet the interview gets out of control as (self-) questioning turns into (self-) accusation: she addresses her marriage to Mroué, her husband and director, before moving onto sex, theatre work, its questionable dimensions, dependencies, bad salaries, and the exploitation of her own biography. The setting’s artifice, a glass case filled with water and fog, only enhances the fact that the speaking, self-questioning figure on stage remains, despite all her biographical reference points, exactly that: a theatrical figure on stage. Every form of fixed identity is a construction.

The question of image production is taken to the extreme in “Who's Afraid of Representation” (2005), a collage consisting of quotes from performance classics mainly from the 1970s and recordings of personal statements given by a murderer traumatized by the wars in the Middle East. Excerpts from interviews with Marina Abramović, who exposes her body to extreme situations in order to utilize it as authenticated art, are juxtaposed with the essentially different, equally extreme but wholly art-unrelated bodily experience of war and terrorist attacks. Through these contrasts, the piece raises the disturbing question what a real experience essentially is, and whether or at what costs it can be used or exploited for artistic purposes.